Maricela Cornejo made a big statement on ESPN. 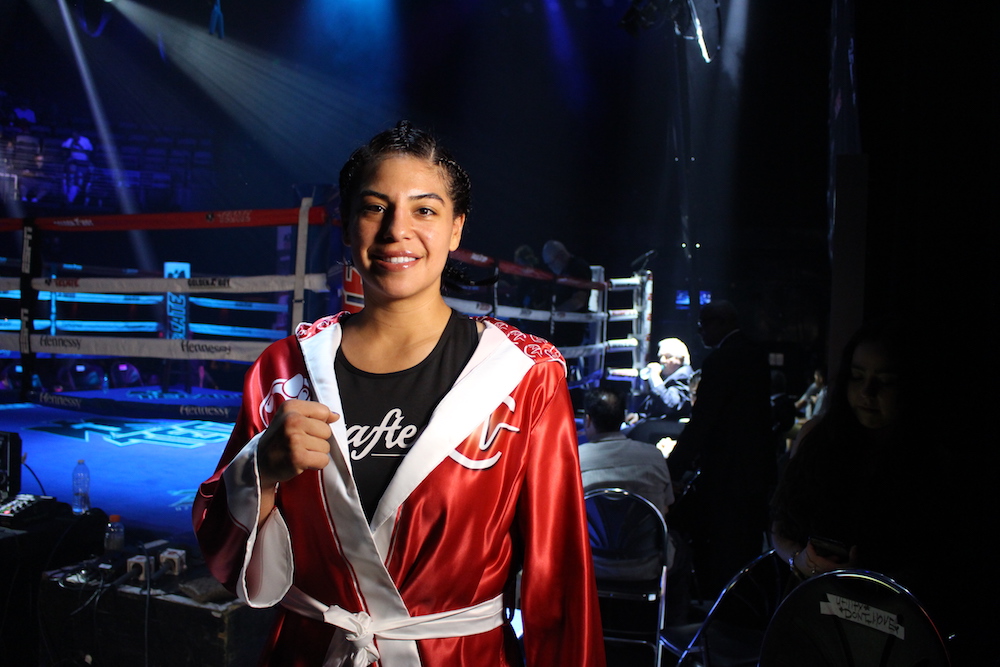 In the sport of professional boxing, there is no bigger statement that a fighter can make than with a knockout win. Yet an even bigger statement would be to do it on the worldwide leader in sports, ESPN, in front of an audience of millions on the most watched sports program in the world.

A knockout is precisely what Golden Boy Promotions super middleweight contender Maricela Cornejo registered when she stepped in against opponent Samanta Pill as the lead-in bout on Golden Boy on ESPN on July 13, 2018, in downtown Los Angeles at the Novo at L.A. Live.

Cornejo, (12-0, 5KO) utilized a jab to set up her straight right hand and began to dominate in round two with heavy head shots.  Television stats had Cornejo landing 15 punches in round one, and 46 in round two as Pill, a more than able opponent who won two Toughman competitions, simply could not get away from the consistent offense from ‘La Diva’.  The fight served as the first televised action as Cornejo’s promotional stablemate Joet Gonzalez won the NABO featherweight title in the fight cards main event.

The official stop came at the hands of Jack Reiss at :41 left in frame three after repeated unanswered shots including a solid left hook and continued right hands from Cornejo, who has been sparring with male boxers in the hottest temperature fight gym in California: noted trainer Joel Diaz’s desert-set confines in Indio.

ESPN broadcasters made note of Cornejo, who walked the red carpet at the Sicario: Day of the Soldado premiere last month, telling the boys she gloved up against to not take it easy on her.  Cornejo has boxed at the professional level since 2012 and is a one-time WBC International Female super middleweight champion.

The results of her fight camp, which included a vegetarian diet, showed as Cornejo (@maricelaladiva) cut off the ring and controlled the action throughout the contest. It was the first time Cornejo faced an opponent taller and bigger than herself.  A replay of the fight can be watched here: https://www.youtube.com/watch?v=Cq4JXjmnRtc.

“I feel good. I’m very happy with the camp we had with my head trainer Antonio Diaz (brother of Joel Diaz),” said Cornejo following her third straight knockout win.  “In this fight, I just had to adjust to her being six feet tall. Fighting Pill just showed only a little of what I’m capable of. I can’t wait to fight an even better opponent to show all of my capabilities.”

Ringside With Raymundo: GGG-Canelo II- What We Know So Far
24/7 Canelo/Govkin Recap