We review 24/7 Canelo/Golovkin, in the lead-up to the highlyanticipated rematch. 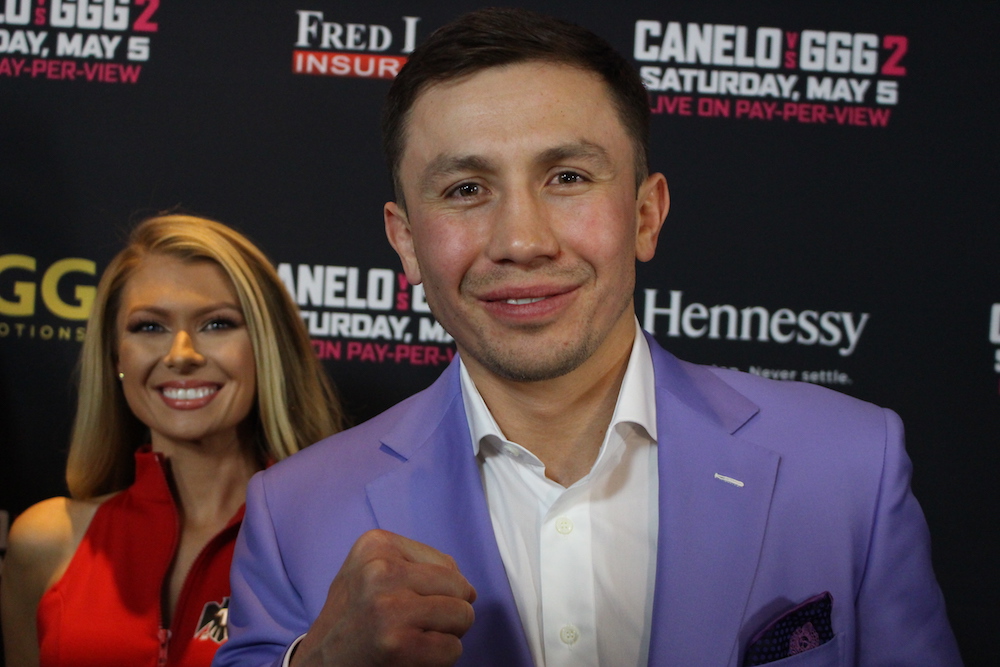 “What is respect,” Gennady Golovkin rhetorically asks HBO cameras during a training day spent ravaging the heavy bag and mitts that Abel Sanchez holds up in preparation of the duo’s second go-around against opponent Canelo Alvarez.  Golovkin proceeds to echo the sentiments he has felt in the innermost parts of his psyche following Alvarez’s positive test result for Clenbuterol; that Alvarez doesn’t respect the sport, the networks, or the fans by causing the original rematch date to be pushed from May 5, 2018, to September 15, 2018.

“Is that what you call respect?”

Sans interlude, HBO then jumps to Alvarez who himself is sweat-filled in his gym confines.  In reality show cut-fashion, Canelo responds by bashing Golovkin’s opponent listings, noting that if GGG respected the sport that he would have faced more champions.

A multitude of heavy bags, including the ever-more-popular growing Aqua Bag, are hit and pool noodles dodged by both fighters as the opening monologue opens the latest installment of HBO 24/7: Canelo/Golovkin 2.

Hand-wrapping and glove donning continue the gym setting of the 25-minute show, with a note by narrator Liev Shcreiber that the fighters are training roughly 150 miles away from each other in Big Bear (Golovkin) and San Diego (Canelo) California settings.  Shown in sit down positions, both Canelo and GGG continue to explain their displeasures with each other, followed by a showing of happier times; both fighters in superman poses with arms raised and smiles wide alongside each other in the aftermath of a sparring session that occurred years back.

HBO then pans to September 16, 2017, and the site where fight No. 1 took place, the T-Mobile Arena in Las Vegas, Nevada.  Fight commentator Jim Lampley breaks down the attributes both fighters brought into the ring that night while Kellerman explains that fight No. 1 represented the pinnacle of Golovkin’s career to that point, and that for Canelo, fight No. 1 was more of a ‘been here, bright lights’ type of fight that Canelo was already used to being in.

Trainer Sanchez chimes about a slower start than wanted in the outset of the breakdown of the fight, with fight clips showing the early portion of the fight in sped-up fashion.

“Gennady Golovkin appears to have finally arrived in the building,” states Lampley with fight clips pro-GGG showing Canelo on the receiving end of high-end shots midway through the middleweight contest.  “I felt like I was doing more, getting to him more,” says Golovkin of his work in the mid-rounds.  “The ninth round was a big one for GGG”, states Lamps following a great action sequence in which Golovkin had applied immense pressure without much get back from Canelo.

“The fight, I felt, was very even,” throws in head trainer Eddy Reynoso of Team Canelo.  Reynoso felt, and thus implored his fighter to create more offensive activity down the stretch, highlighting speed, movement, and defense to his fistic charge.

Heading into round ten, HBO cameras cryptically pan in the direction of judge Adalaide Byrd as the networks unofficial judge, Harold Lederman, announces his round count at that point: “Okay Jim, I’ve got it 7-2 for Gennady ‘GGG’ Gololvin.”  Three rounds later, Byrd turned in the scored heard round the world, resulting the contest 118-110 in favor of Alvarez.  Clips turn pro-Canelo in the last nine minutes of the fight. “A right hand hurt him, made him stumble,” says Canelo.  “He didn’t hurt me,” says Golovkin in retort.  Lederman is asked by Lamps what score he has fight No. 1, and Lederman, whose fight game resume extends back to the 1960’s, says he has it 116-112, or eight rounds to four for Golovkin, which perhaps solidifies Lampley’s assertion that Canelo ended the fights final frames in a positive manner as Lederman had matters 7-2 for 3G heading into rounds 10, 11 and 12.

The first and most controversial score was read to the audience first: “118-110, first of all, that didn’t happen for either fighter… it particularly didn’t happen for Canelo,” states Lamps.  A score of 115-113 from judge Dave Moretti is read to the crowd by Hall of Famer Michael Buffer, followed by Don Trella’s 114-114 opinion for the split-draw that would haunt the boxing world in the weeks and months following the affair.  “At the end of the day, a draw is a result that should be satisfying enough for boxing fans, because it means we’ll get to see it again,” quips Lamps ever optimistically.

Ring exits are shown, followed by a GGG in disbelief in his dressing room while Golden Boy Promotions personnel applaud an entering Canelo upon entering his own.  An obvious ode from 3G trainer Sanchez is thrown as only one judge was of the female variety.  “I think one of the judges had her fight card filled out before she came to the fight,” says Sanchez of the Byrd result.  “This is unbelievable, terrible…” says a despondent Golovkin to the media at the post-fight press conference.  “Outside of the scorecards or the draw, I think this fight gave boxing what it needed,” stated Canelo into the microphone when thrown in his direction and who himself believes won the bout at least eight rounds to four.

“I’m for justice, I’m for truth,” states Golovkin, who also plainly states to HBO that Canelo lost the fight.

Canelo noted the draw result wasn’t what he wanted after all the training and Aqua Bag hitting, and the only thing to do from that point was accept it and try to make fight No. 2.

Scene change to the Staples Center in downtown Los Angeles to formally announce the rematch signing which was agreed to in January 2018.

3MR was onsite (http://www.3morerounds.com/inside-the-canelo-golovkin-la-presser/) as the suit donning fighters walked a red carpet inside the Microsoft Theatre before addressing the hundreds that had amassed at the LA Live outdoor setting. 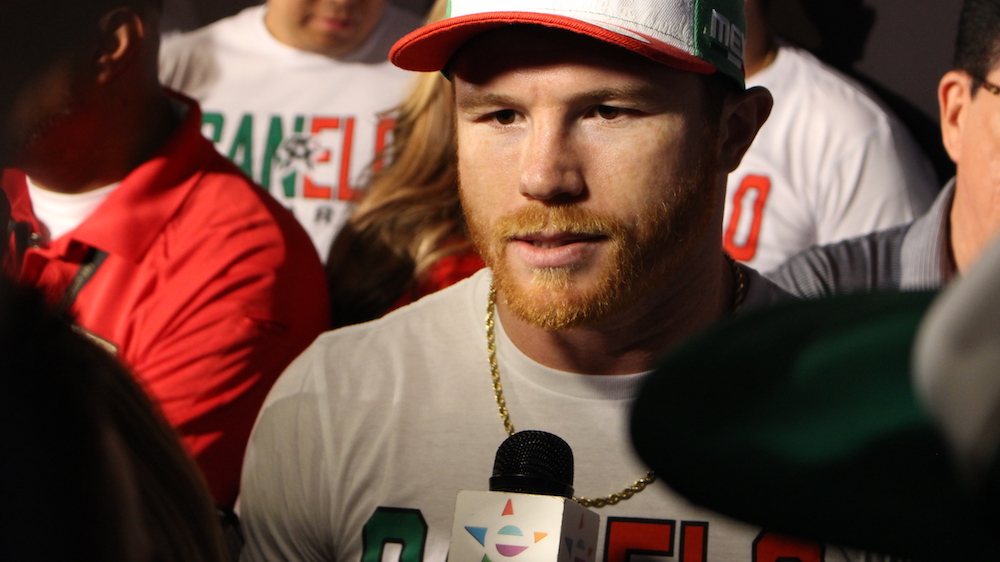 “They’re wrong, they’re wrong.  It can’t be true,” are Canelo’s thoughts of the news that broke only days after the Los Angeles press event that VADA had two positive test results for Clenbuterol, a result that would ultimately scrap the May 5 date and the NSAC place a six-month suspension on Alvarez. “Something happened… it seems it was in the food, in the meat,” noted Chepo Reynoso, the most senior representative of Team Canelo.  Reynoso claims a background in the meat industry and cites people that he knows in Mexico who provide Clenbuterol to their cows.

“I never have the intention of ingesting things.  I don’t need them…  I respect my sport.  I would never do that.”  Poignant and straightforward are Canelo’s statements of his career that are now forever tainted by a positive testing for a performance-enhancing drug.  Canelo claims he was not as up to speed as his trainer is with what was occurring with his home countries meat contamination, while Golovkin remains steadfast that it’s above all and anyone else, the fighters responsibility to be aware of all things, well, fight body.  “You know what you consume.  You’re responsible,” believes a Jordan shirt wearing Golovkin, who saw his record add a third column in indicating wins, losses, and draws; the draw was Golovkin’s first in a fistic affair.

April 3, 2018, served as the day in which Canelo threw himself embraced the way of the Samurai in true hara-kiri fashion.  At a nondescript location near downtown Los Angeles, flanked by Golden Boy Promotions head Oscar De La Hoya and a slew of lawyers, Canelo officially withdrew from the planned May 5 re-do against Golovkin.  File footage from the Nevada State Athletic Commission saw the proposed adjudication agreement of a six-month suspension handed over Alvarez’s way by way of unanimous decision.  Chairman Anthony Marnell explained how it was not the NSAC’s determination if Alvarez had taken a banned performance-enhancing drug on purpose; their role is to enforce their rules and regulations with a sort of indifference as to whether or not an athlete knowingly or unknowingly took a PED.

Scene change to the Stub Hub Center in Carson, California, where Golovkin decided to not waste a training camp and turn May 5 into a $1 million payday in lieu of a $0 payday by destroying Vanes Martirosyan.  The ring walk arguably took longer than it did for Golovkin to dispose of Martirosyan via second-round knockout.

If we have the opportunity to end the fight early, we will,” prompts an again sweat-filled Golovkin as he shadowboxes in the ring at The Summit gym in Big Bear.  GGG embraces the dichotomy between fight No. 1 and the upcoming fight No. 2, separating the first 36 minutes spent against Canelo and providing his prediction on the scheduled 36 minutes or less planned for September 15, 2018.  “I believe I win… this is different.  Different story.  New story for me.  New story for him (Canelo).”

“My little daughter Maria.  Seven months,” proclaims proud daddy Canelo as Maria makes her San Diego training camp debut to watch her famous father spar.  Canelo then relays the 411 on his right knee surgery which the fighter decided to have following the scrapping of May 5.  A cyst was removed and Canelo trains with a protective brace, with running and training, at Canelo’s own words, reportedly uninhibited by the procedure.  “Golovkin is a donkey who doesn’t think.  He doesn’t have a thought in his head,” remarks the elder Reynoso as Canelo sparring clips show Canelo clipping the other man in the ring wearing headgear and crotch protection.

The fantastically scenic camera angles that have won this series multiple Emmy’s in previous years shows both fighters in ‘walk away from explosions’ prose and slow-mo hand wrap, heavy bag damage visuals, yet Canelo had perhaps closed out the single episode HBO 24/7 with the truest words of wisdom that can be verbalized in anticipation of fight No. 2.

“I can say a thousand words right now in front of the camera… I could say what I can do to him.  On September 15, I actually have to do it.”