Musings from the Canelo-Chavez stop in LA

Snippets from the final stop of the press tour in Los Angeles.

The mood was quite jovial inside the La Huasteca Restaurant as the Canelo Alvarez/Julio Cesar Chavez nationwide press tour made its last stop in Los Angeles recently.

The star powered room contained more stars than could be interviewed at one time in what was a conglomerate of Mexico’s finest fighters at the Plaza Mexico in Lynwood, California.

In first was Golden Boy Promotions head Oscar De La Hoya, who made a direct line into the trenches, jumping right onto interview row and fielding questions regarding the biggest fight so far.  The fight is set for May 6, 2017.

In next through a nondescript, celebrity-entrance style hidden door was Julio Cesar Chavez Jr., who held his daughter while passing through a group of reporters still grubbing on the free food provided by the muy rico restaurant.  Chavez Jr. rocked sunglasses and a Joker-color ensemble, a green and purple suit with ankle-visible length pants and slip on black shoes.

“I’m very focused on this fight because it is a great opportunity for my career. I feel great to be involved in this event and show the world I can beat anybody,” said JCCJ, who agreed to come into the fight at a 164.5 pound catch weight with a one-million dollar per pound penalty for going over the agreed weight.

“My father’s name will always be with me for what he accomplished in the ring, but when I fight Canelo on May 6th, you can expect a guaranteed war.”

The questions thrown at fighters prior to addressing the waiting crowd outside are standard, so Chavez Sr. saved his best stuff for when he was outside of the Plaza Mexico while sitting with the boxing-star studded group for a live Q & A.  “I want to thank everyone who is here, and tell everyone that this fight is for you. Everyone will see a grand, grand fight–and the one who will win is the one with the bigger cajones!”

Just like he may do for his ring-walk on May 6, Canelo entered last into the La Huasteca Restaurant and brought the room into an even louder atmosphere while fans clamored outside and peeked in for a look at their favorite Mexican fighters.

“The rivalry has always been there between Julio César Chávez, Jr. and I, but obviously during this tour there were a lot of things said behind the cameras that made it even more intense. We’re going to work really hard to give everyone a great fight,” said Alvarez.

Once the media were done with the great Mexican collective of fighters, each slowly made their way to the outside proceedings, a few hundred fans that waited in the chilly Los Angeles night while listening to mariachi’s playing on the stage with the Canelo-Chavez promotional screen playing.  Located in a cabana in the middle of the proceedings was none other than Mexican great Juan Manuel Marquez, who did interviews for ESPN’s Golpe A Golpe with the fighters before they made their way to the stage.

Each fighter was announced and made entrances through second floor doors, each looking down and waving to the crowd.  Alvarez went further and threw a few punches into the air after his open-hand and thumbs up salutes. 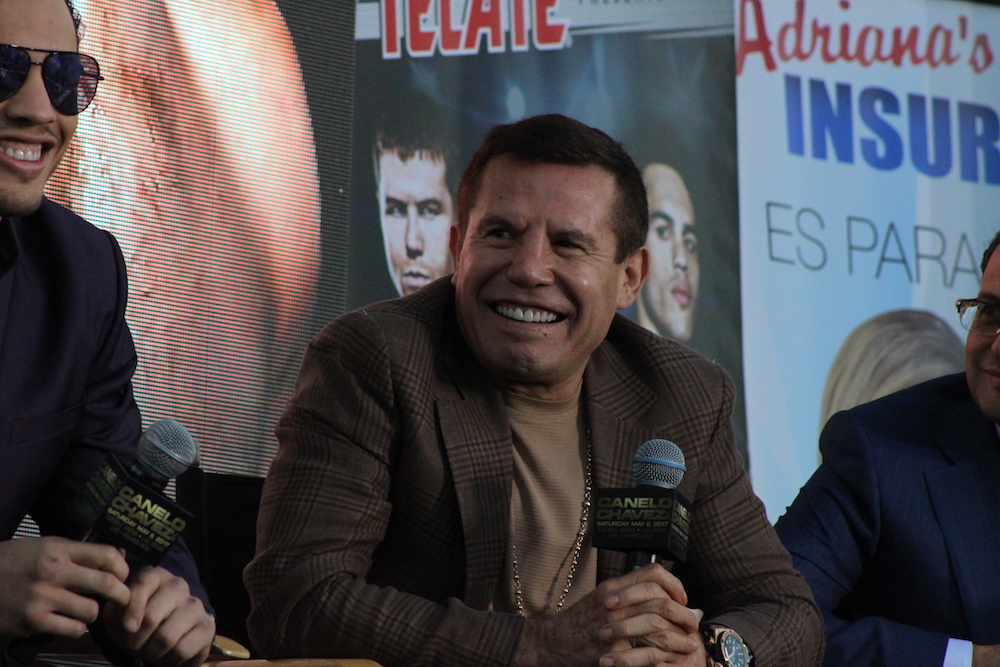 Chavez Jr. was delayed in getting down to the stage, being announced twice by DJ Tattoo to begin the proceedings, yet slowly the dais filled with fighters, trainers and promoters involved, with ESPN’s Bernardo Osuna serving as a moderator.

Perhaps the greatest moment came when JCCS told the crowd that, (paraphrasing) “De La Hoya beat me when I was old!”, which prompted De La Hoya to stand up and start to take off his tailored jacket while making his way toward JCCS in mock fashion in what could have turned into De La Hoya-Chavez III.

Once the obligatory nose-to-nose stare down was complete, the four-city press tour was complete and the countdown began for May 6, 2017, when two of Mexico’s biggest young stars will meet head-to-head at the T-Mobile Arena at the Mecca of boxing, Las Vegas, Nevada.