Dillian Whyte and Lucas Browne to meet at The O2 in London. 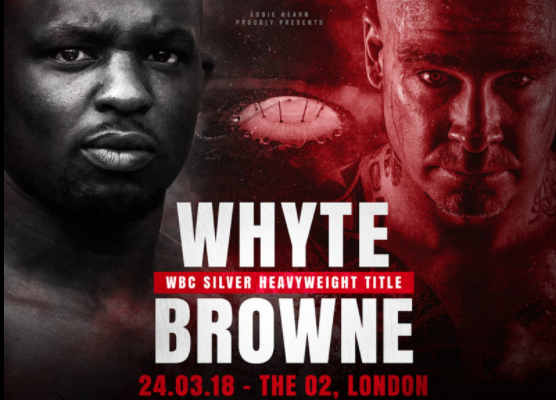 Heavyweight contender Dillian Whyte will meet Lucas Browne at The O2 in London on March 24, in a 12-round clash on Sky Sports, according to Matchroom Boxing.

Whyte (22-1, 16 KOs), who has gone 6-0 since his lone defeat to heavyweight titlist Anthony Joshua in December 2015, is coming off a win over Robert Helenius and is eyeing an eventual showdown with heavyweight beltholder Deontay WIlder.

“I can’t wait, I hate Lucas Browne and I want to hurt him,” said Whyte. “He’s said some nasty things and he’s going to have to pay for them.

“I don’t think he really wanted this fight. A deal was in place before then he started to try and change the terms. He kept delaying things after we gave in to his demands and started saying there was a fight in America he was chasing. We’ve bent over backwards and up till now he’s been more interested in making excuses than taking the fight. It’s been frustrating but we’ve finally got over the hill now so let’s go.”

Browne (25-0, 22 KOs) for his part, is no stranger to fighting on the road, and the Australian owns a KO victory over former titlist Ruslan Chagaev in Russian in March 2016.

“I’m genuinely looking forward to coming over to the UK again and bashing Dillian,” said Browne. “If Helenius and Dereck Chisora hurt him, wait until he feels how I hit. I don’t like anything about him. He’s a loud mouth and I want to take his head off.

“I have absolutely no fears about coming to London and facing Dillian. After you go to Chechnya to fight, nothing else compares. I’ve fought in England five times already and love fighting there. I know if I stop Whyte impressively I’ll be getting another World title shot.”

Tickets for the event will go on sale next week with details to come.