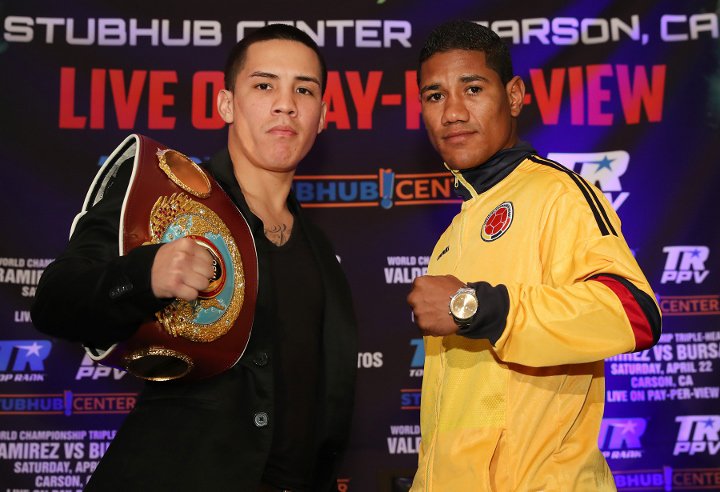 Valdez will headline the April 22 Top Rank pay-per-view at the StubHub Center when he takes on Miguel Marriaga.

WBO featherweight champion Oscar Valdez will be headlining a pay-per-view for the first time in his young career.

The 26-year-old Nogales, Mexico native will face No. 1 contender Miguel Marriaga at the StubHub Center in Carson, California on April 22 in a card that will feature fellow stablemates Gilberto Ramirez and Jessie Magdaleno, as well as the pro debut of newly-signed U.S. Olympic silver medalist Shakur Stevenson.

Valdez (22-0, 19 KO) will be making the second defense of his title. He scored a seventh-round TKO victory over Hiroshige Osawa in November on the Pacquiao-Vargas undercard.

“Every fight is important to me. I respect Marriaga just like every fighter I face. And I will do whatever I have to do to win,” Valdez said.  “This will be the second defense of my belt and I know the challengers are going to come after me, but I will be more than ready to give the fans a great fight and retain my championship.”

Marriaga (25-1, 21 KO) is known as a hard puncher. His last two fights have ended in knockout victories, including a sixth-round TKO against Top Rank prospect Guy Robb back in August.

He is looking for a similar outcome against Valdez.

“The only way I don’t win my Oscar on April 22 is if Warren Beatty and Faye Dunaway read the decision,” Marriaga said.  “Second chances are rare in boxing and I’m going to make the most of my second shot at a world title. My trainer. “Professor”(Samuel) Gómez, and I will be prepared to give the performance of a lifetime on April 22.”

“Óscar Valdez, Gilberto Ramírez and Jessie Magdaleno are becoming the new faces of boxing.  They are in the hurt business and they love their work.  That’s why their fan base is growing like the S&P, they give the fans great value — a big bang for their buck,” Hall of Fame promoter Bob Arum said.  “And with Shakur Stevenson, the sky is the limit.  He is such a talent.”

The live pay-per-view telecast will begin at 9 p.m. ET / 6 p.m. PT and will be available on all conventional platforms, including all major cable and satellite systems, as well as Top Rank’s digital distribution via www.TopRank.tv and mobile devices.