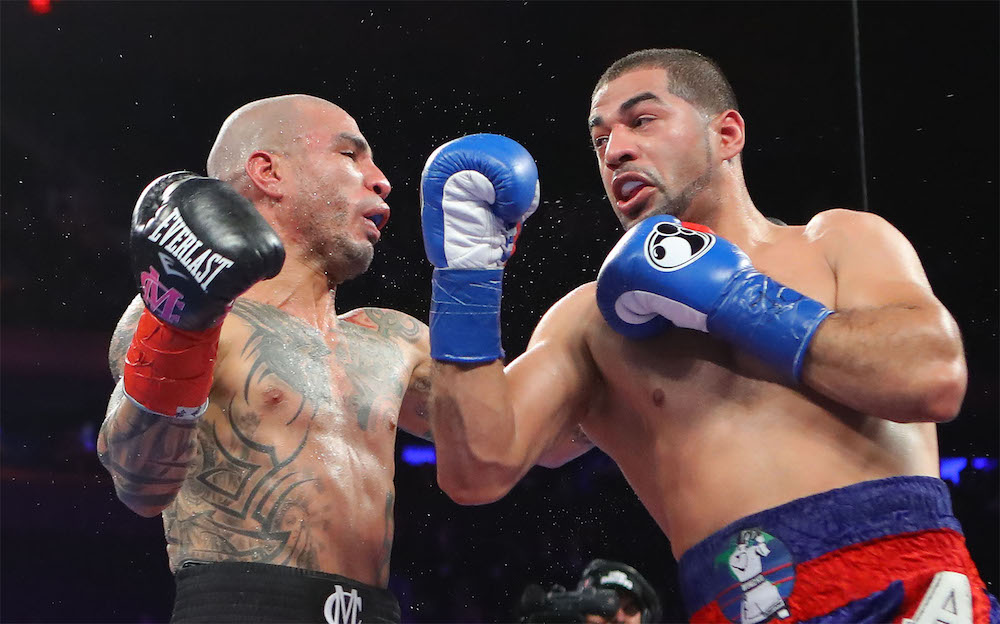 It was supposed to be a successful swan song for former multi-division champ Miguel Cotto (41-6, 33 KOs), who was entering the final fight of his career, defending his junior middleweight title against Sadam Ali (26-1, 14 KOs) at Madison Square Garden in New York City last Saturday night.

However, Ali didn’t want to be another foot note in the amazing career of Cotto, not only showing up to fight, but showing up to win.  Cotto, who didn’t quite look like his old self for a portion of the fight, had his moments in spurts, with combination punching and good head movement to make Ali miss.  But Ali made the most of the opportunities he had to land, and actually stunned Cotto on a handful of occasions, despite being unable to knock him down.

After taking a couple of rounds to get his gameplan going, Cotto did well in the middle rounds, boxing well and going to the body of Ali.  But as the fight went into the later rounds, Cotto began playing defense more often than note (albeit doing it well), while Ali’s confidence grew, as it did his punch output.

Ali’s quicker and snappier punches, along with an apparent left bicep injury (in the seventh, according to Cotto), helped Ali pile up some much needed points.

“I worked hard for it,” Ali said. “I took advantage of this fight, and I made sure to make it count. I want to Thank God, and also thank team Cotto, They could have taken an easier fight if they wanted too. I had him hurt here or there in the first couple of rounds. I knew I had to do something, or he would have dug in. By the 11th round, I thought the fight was close. Whatever Golden Boy Promotions has next, I’ll take it. Good things happen to good people. I have been training since I was eight years old, and I am glad I got this win at MSG, in my hometown.”

Cotto, who was obviously disappointed with the loss, also gave Ali his props and felt the decision was just.

“I am feeling good with the performance,” Cotto said. “Something happened to my left bicep in the seventh round. I don’t want to make excuses, Sadam won the fight. It is my last fight. I am good, and I want to be happy in my home with my family. Thank you for all the fans. I am proud to call MSG my second home. I had the opportunity to provide the best for my family because of the sport.”