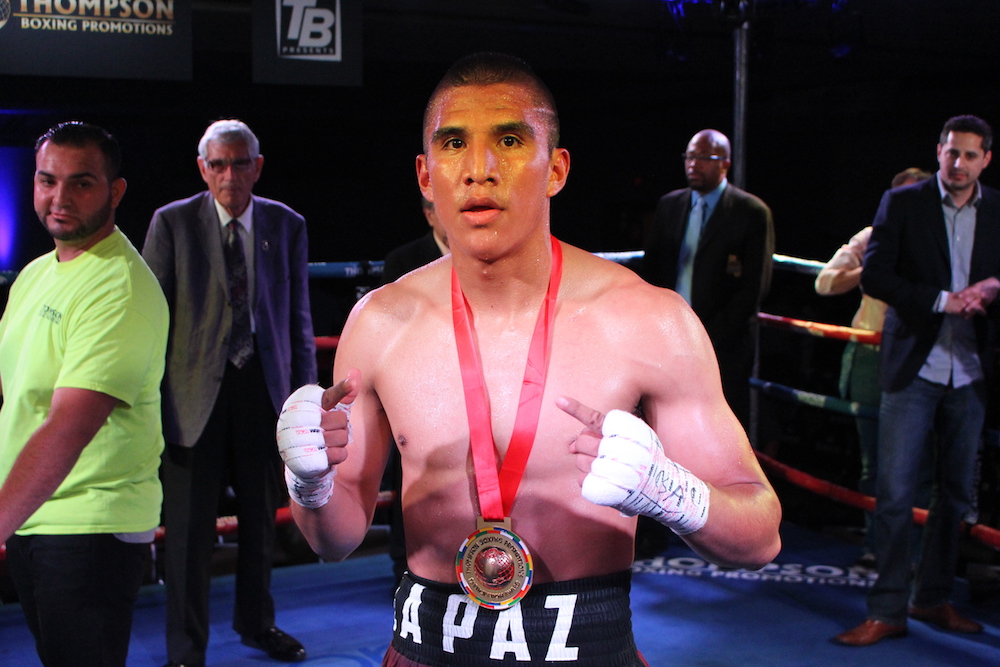 Thompson Boxing Promotions hosted yet another action-packed card featuring a heavyweight knockout, a sizzling back and forth super featherweight bout and a main event upset on a sweltering hot Southern California night at the Doubletree Hotel ballroom.

The main event featured Indio, California lightweight Manuel Mendez.  The 26 year old fighter began his career in 2010 via TKO loss, and then went on to go undefeated minus a draw in 2016 until June 23, 2017.

Mendez faced Mohamed Rodriguez, a fighter who went 2-2 heading into fight night, last going the distance against Fidel Maldonado, Jr. in April 2017.  Rodriguez came on strong and gave Mendez the second TKO loss of his career.

Rodriguez, (10-4, 4 KOs) made first contact with light jabs and straight rights, then fired off five punches, most of which did not land.  The fighters got tied up and Rodriguez was pushed to the ground in what was not a knockdown.  Mendez sought to time Rodriguez, and the trading began with Mendez going to the body and Rodriguez returning in kind.  Mendez continued to the body mid-round, with Rodriguez keeping his hands busy and planting a right hand on Mendez’s head towards the end of the round.

Round two started slow, then picked up with Rodriguez landing a body blow.  A tie up ensued and both fighters circled while looking for an opening.  Mendez became off balance and ate a shot to the face, and after a brief break for a referee warning to keep things clean, Rodriguez landed multiple punches and ended the round on a positive note.

Punches came in succession from Rodriguez to begin the third, then after a lull in action Rodriguez again picked things up and was able to drop Mendez.  Mendez beat the count but ate another big head shot.  Mendez came back with a one-two and began backing up Rodriguez in what were the best moments of the fight to that point.  Mendez continued to the body as Rodriguez slowed up.  Rodriguez ended the round strong and Mendez was happy to hear the bell ring.

Round four was more Rodriguez, who became more confident as the fight went on.  Mendez was again dropped from a barrage of punches punctuated with an overhand right and the fight was stopped by referee Lou Moret.  Mendez’ record fell to 15-2-2, 11KO.

A fully caped Jessie Roman stepped in against Erick Martinez in the night’s co-main event.  The cape Roman wore had the Mexican and American flags stitched in the inside, which he showed off to the crowd before the action started.

The fight started and was front in ring-center, each fighter testing out the waters behind straight-jabs.  Feints and clinching followed in what was the slowest start of any of the night’s fights.  Outside rights and lefts landed for Martinez to start round two, becoming the first of the fighters to take charge in the fight.  Roman buckled down and threw in combination, which delighted the fans in attendance.  Roman dodged three consecutive punches in impressive defensive fashion, then threw out a right hand that scored.

Round three saw Roman firing a one-two to Martinez as both fighters started to settle in and trust their offense.  Martinez moved more than he threw, with Roman electing to keep his output constant, which led to a few straight right hands bouncing off the chin of Martinez.

Martinez recovered well and landed shots of his own, with Roman then going body hunting while on the ropes.  Roman landed a left hand, then ate a right from Martinez towards the end of round.

In frame four, both fighters started fast and threw with both hands to both the head and body, advantage Roman, who began to back Martinez into the ropes on punches.  Roman shot down punches to his shorter opponent and kept active with his hands as Martinez circled around the ring.  Straight right hands had Martinez backing up into the ropes once again, Martinez missed with a haymaker and ate a right hand to the side of the head, showing signs of wearing down before the round ended.

Before the fifth round started, the referee waived off the fight.  Martinez decided to not answer the bell, giving Roman, (22-3, 11 KOs) his eleventh knockout win via TKO.

A solid left hand landed early for Sanchez, followed shortly by a jolting body shot that referee Lou Moret saw as low and gave Bartolini some time to recover.  Sanchez then went right back to work and used three punches to drop Bartolini, who fell to the canvas and indicated to referee Moret that he wanted no more.

Super featherweight Miguel Carrizoza stepped in against undefeated Michael Dutchover and started with some nice body work as both fighters showed quickness and willingnessto trade in the outset.  In ring center, the fighters traded jabs, then Dutchover stepped to his left and fired a straight right that connected.  Another nice right hand landed at the 10 second mark before the first frame ended.

Carrizoza leaned in and threw a nice right to start round two, then the trading started between the fist throwers.  A cut appeared over Dutchover ‘s left eye following an exchange, and as the action continued, Dutchover worked around the ring and returned fire.  Dutchover stayed busy, not giving Can a chance to capitalize on the cut.  Dutchover went to the body and sent Carrizoza to the ropes in a fight that changed momentum plenty of times.

Dutchover began the third with a one-two combination, then later a left hand wowed the crowd.  The referee wasn’t needed in this round as the fighters traded at will with little in-fighting.  A right hand put Carrizoza against the ropes, who fought back valiantly, putting Dutchover against the ropes as the round ended.

Frame four started in the same fashion as the first did; no referee needed as the trading was constant and clean.  Things were on even terms the majority of the round, with Carrizoza dedicated in going to the body and Dutchover landing with his head attack.

Round five was more of the same, with a bit of slowing and fatigue setting in for both boxers.  After a tie up and referee break, the fighters traded from the outside.  Dutchover landed an almost flush right hand, and Carrizoza landed a right hand as Dutchover was heading towards a corner.  In the final seconds, the pair traded in what was another tough round to score.

Respect was shown via glove taps to start the six and final three minutes of the affair.  Carrizoza went to work with a body-head offense, followed up with a one-two that landed.  Dutchover circled and got himself caught with a right hand.  Carrizoza shot with the left hand and then found himself first on the ropes, and briefly in the corner before being able to step out.  A nice left hand from Dutchover landed flush, and Dutchover kept up his output as Carrizoza tried some offense of his own.  At the ten second click, both fighters feinted more than they threw.

“I’ve never gone past three rounds so tonight was a good learning experience, but I need to step up my game and stay composed. I also learned you can’t knock everyone out. Now it’s time to get back into the gym, learn from my mistakes and continue to get better,” said Dutchover to Supreme Boxing’s Anthony “Stacks” Saldaña ringside following the bout.

WBC FECARBOX featherweight champion Rafael Rivera (25-0-2, 16 KOs) faced Ruben Tamayo in the fight prior to the nights main events and again had a solid outing and knockout win just inside three rounds.

Rivera vs Tamayo was tactical to start; each fighter threw cautiously from the outside.  An even-termed first frame led to Tam landing a solid right hand which prompted Rivera to answer back at the end of round two. In round three each fighter bounced on their toes and traded on the outside and inside.  Rivera found himself towards a corner and eating body shots.  Tamayo threw from mid-ring and briefly got Rivera in the corner.  Rivera then worked his way to the middle as the crowd asked for more action.

Tamayo scored with a one-two, but as the round ended as Tamayo was dropped and stopped with a right hand at the bell from Rivera.  Referee Lou Moret began his count, and when Moret saw Tamayo would not continue despite being on one knee, the veteran referee waived off the bout at a scored 2:58 of round three for a knockout win for Rivera.

Onetime heavyweight contender Malcolm Tann shook off a nine year ring absence last year in October and knocked out an undefeated Nick Asberry in what had to feel like a career resurgence of sorts.  Tann began his fistic career in 2002 and had faced the likes of Chris Arreola and Alexander Dimitrenko prior to stepping away from the sport.

Tann would have his hands full with Russian Sergey Kuzmin in the nights’ opener.

In the opening ticks there was a bit of jab trading, then big shots to the body and head started to rein in from Kuzmin, with a left hand to head landing that set the tone of what was to come.  Two punches put down Tann midway through the first in the nights first recorded knockdown. More left hands from Kuzmin hadTann in trouble, and Tann actually threw a leg kick during a clinch and got a referee warning.  A right hand dropped Tann again for a second knockdown in round one.

Left hands continued to find a home for Kuzmin, with Tann making a quick comeback with one-two combos while on the ropes.  Kuzmin’s left hand kept settting up huge right hands, and again Tann returned fire which made round two more entertaining than the previous.  Kuzmin kept sticking his jab out, and a right hand dropped Tann for the third time in the fight.  Kuzmin got in one more big shot before the round ended.

The third round saw Kuzmin with the steady jab that had led to much success throughout the contest.  Tann tried to set up a big shot with his jab, without success.  A big right hand landed midway through the round, which Tann took well.   A flurry again had Tann in trouble, and after a rally from Tann, Kuzmin kept in control and elected to go to the body.  The fighters traded to end the round, which either one could have one, and may have been Tann’s first round win in the fight.

Tann started round four with a right hand, then popped the jab in a strong start. Kuzmin threw a left hand bomb that landed to remind Tann of his opponent’s strength.  Seconds later Kuzmin landed a right hand that felled Tann and ended the fight at 1:19 after the judge immediately waived off the bout once Tann hit the canvas.  Kuzmin’s record moved to 11-0 with 8 KOs. 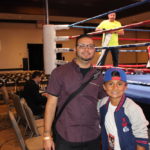 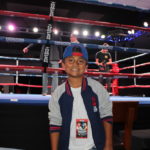 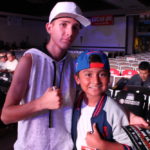 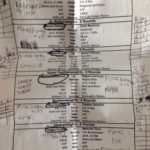