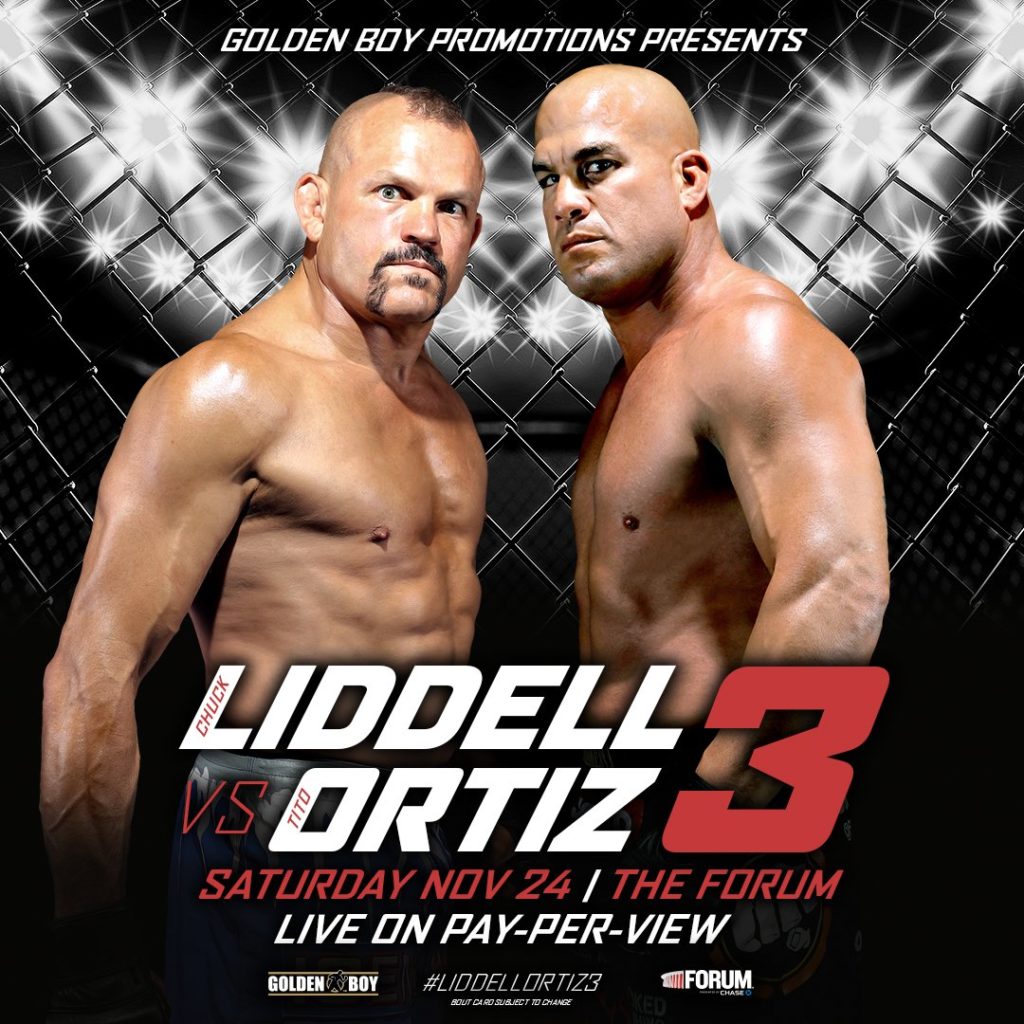 Golden Boy Promotions begins its foray into the world of mixed martial arts on November
24, 2018 as the Southern California based boxing promotional company presents Liddell vs. Ortiz 3 live at The Fabulous Forum in Inglewood, California.

“We are very excited to announce what will be a monumental event. Golden Boy Promotions hosted its
first event many years ago and it was a success. So we know what we are getting ourselves into. We also
know that are doing this for the betterment of the fighter, like we’ve always done. We’re giving fighters
another platform to get exposure for their great skills. I’m happy we will be hosting this fight featuring
two MMA legends,” said GBP head Oscar De La Hoya.

The Liddell/Ortiz rivalry began on April 2, 2004 at UFC 47, which Liddell won via KO inside two rounds. The fighters would not cross paths again until December 30, 2006 at UFC 66, a fight Liddell (21-8-0), again won by KO, this time in three rounds. Liddell fought six more times before retiring in 2010.

“I know Tito is hoping that I’m a shell of the man I was because that’s the only way he would have a
chance against me. But he’s going to find out in November that I’m not. I still hit just as hard and I wrestle just as well. He’s going to get knocked out… I’m excited to be back in the sport. I’m excited to prove to everyone that you can do anything you put your mind to. I’m going it knock him out!”
Ortiz, (17-11-1) fought eight more times following the Liddell rematch loss before retiring in January 2017 following a win over Chael Sonnen in a Bellator event.

“On November 24 and live at the Forum, I will have the opportunity to put you out once and for all. I
fought Chael Sonnen last year. I choked him out in two and a half minutes. He’s still in a heavyweight
tournament and he’s still beating guys. Chuck hasn’t fought in over ten years. I see the opportunity to
finally shut this guy up and finally get my hand raised on my terms.”

HBO is set to televise via pay-per-view.