Deprecated: Methods with the same name as their class will not be constructors in a future version of PHP; mvp_ad_widget has a deprecated constructor in /home/ramon3mr/public_html/wp-content/themes/the-league/widgets/widget-ad.php on line 12

Deprecated: Methods with the same name as their class will not be constructors in a future version of PHP; mvp_authors_widget has a deprecated constructor in /home/ramon3mr/public_html/wp-content/themes/the-league/widgets/widget-authors.php on line 12

Deprecated: Methods with the same name as their class will not be constructors in a future version of PHP; mvp_catfeat_widget has a deprecated constructor in /home/ramon3mr/public_html/wp-content/themes/the-league/widgets/widget-catfeat.php on line 12

Deprecated: Methods with the same name as their class will not be constructors in a future version of PHP; mvp_home_catlist_widget has a deprecated constructor in /home/ramon3mr/public_html/wp-content/themes/the-league/widgets/widget-home-catlist.php on line 12

Deprecated: Methods with the same name as their class will not be constructors in a future version of PHP; mvp_home_taglist_widget has a deprecated constructor in /home/ramon3mr/public_html/wp-content/themes/the-league/widgets/widget-home-taglist.php on line 12

Deprecated: Methods with the same name as their class will not be constructors in a future version of PHP; mvp_facebook_widget has a deprecated constructor in /home/ramon3mr/public_html/wp-content/themes/the-league/widgets/widget-facebook.php on line 12

Deprecated: Methods with the same name as their class will not be constructors in a future version of PHP; mvp_tabber_widget has a deprecated constructor in /home/ramon3mr/public_html/wp-content/themes/the-league/widgets/widget-tabber.php on line 12

Deprecated: Methods with the same name as their class will not be constructors in a future version of PHP; mvp_home_tagfeat_widget has a deprecated constructor in /home/ramon3mr/public_html/wp-content/themes/the-league/widgets/widget-tagfeat.php on line 12
 Diaz knocks out Terrazas on Golden Boy Live – 3 More Rounds

Joseph ‘Jo Jo’ Diaz made quick work of opponent Victor Terrazas in front of a lively crowd in Golden Boy Promotions first edition of their ‘Golden Boy Live’ series on ESPN from the Fantasy Springs Casino on a chilly night in the desert setting of Indio, California.

Diaz, (26-0, 14KO) retained his NABO and NABF featherweight titles with a third round knockout of Terrazas, and afterward, the El Monte, California product called out the WBC title holder.

“I’m ready to have the world title around my waist. Gary Russel Jr.: Your next. Once I defeat him and have that belt around my waist I’m going to give the fans what they want to see.” Diaz said.

The card featured an upset of sorts as Christian Gonzalez faced a tough out in journeyman Rey Perez.  Gonzalez, (18-2, 15KO) suffered his second career loss at the hands of Perez.  Perez got to Gonzalez with heavier shots and consistently pressed the action, which awarded Perez a unanimous nod at 79-73 twice and 78-74.

Power thrower Vergil Ortiz, Jr., kept his KO streak alive at 9 with no losses and showed just why his hype is warranted at this point in his career with a third round stoppage over Jesus Alvarez.

Ortiz, Jr., (9-0, 9KO) held the lightweight NABF title in his hands while talking ringside to this reporter.  “This title only motivates me to take things higher,” said Ortiz. 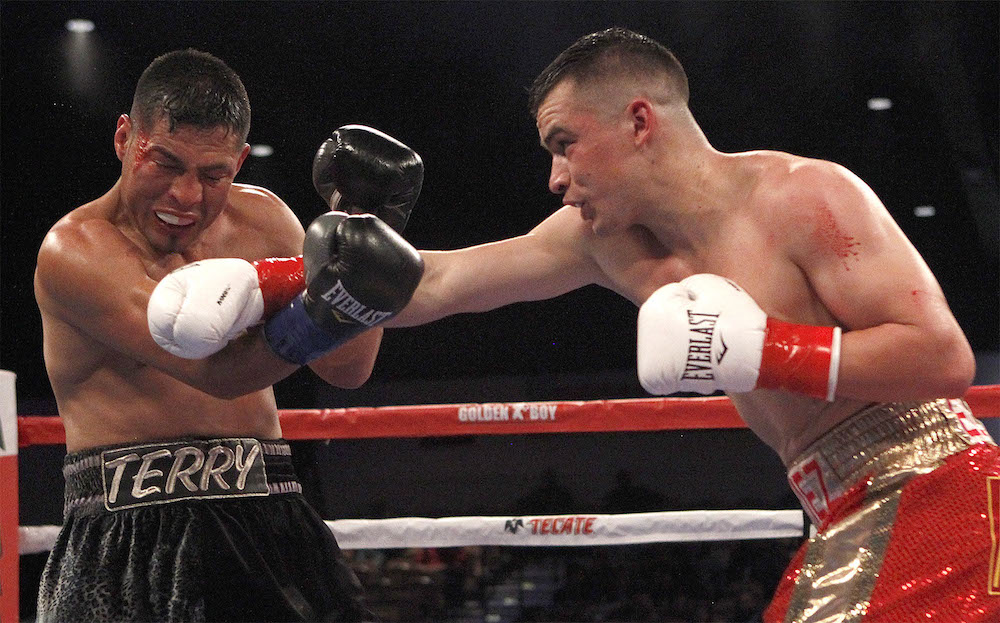 Genaro Gamez had his hands full for a bit against opponent Miguel Mendoza in a super lightweight bout.  Gamez was the younger, fresher fighter, yet Mendoza (23-14-2, 22KO) employed veteran tactics and was able to withstand an early onslaught from Gamez and land heavy shots of his own.  Mendoza proved tough and willing to exchange.

“I had a lot of fun in there,” said Gamez. “I was just playing with him in there in the ring and wanted to get rid of him by the later rounds. I can’t wait to fight again.”

Ultimately Gamez, (7-0, 5KO) was able to land consistently and a corner stoppage halted things after four rounds. Following the fight, this writer spoke to fellow fighter Manuel Mendez, who worked Mendoza’s corner and informed me that Mendoza required a hospital visit following the fight.

Super featherweight Hector Tanajara, Jr., needed less than one round against Eduardo Rivera.  A right hand started things off and Tanajara, (12-0, 5KO) ended matters with a solid body shot that felled Rivera.  Referee Raul Caiz Jr., who had himself a good night of officiating, waived off  the fight at 1:53.

“I wanted to switch it up because I was throwing the right hand a lot,” said Tanajara, Jr. “So, I threw the lead uppercut and I hurt him. I had to be cautious before going for the finish because some fighters play it off, but either way I got the first-round knockout. I’m going to stay in camp and get ready for the next fight.” 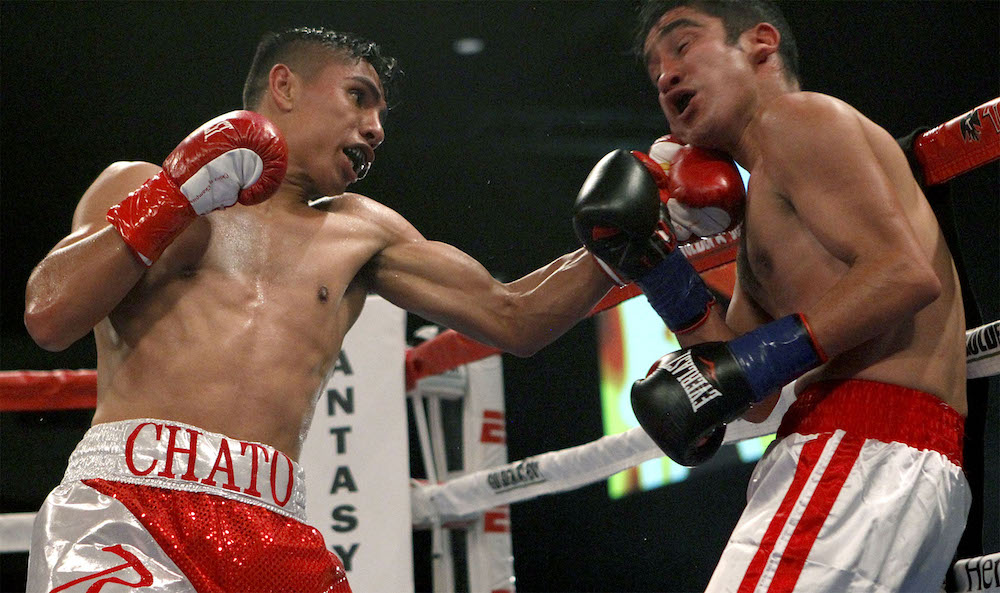 Manny Robles upped his knockout total with a four round TKO of journeyman Martin Cordona.  Robles, (15-0, 7KO) showed impressive all-around skills in breaking down Cardona and the fighter, who is the son of trainer Manny Robles, stopped his opponent at 2:53 in the fourth.

“Even though he wouldn’t go down, I had to keep trying,” said Robles III. “I knew I had to keep working the body and get the knockout. hopefully I can move to 10-round fights this year. After this, things just get tougher as you move up the ranking.”