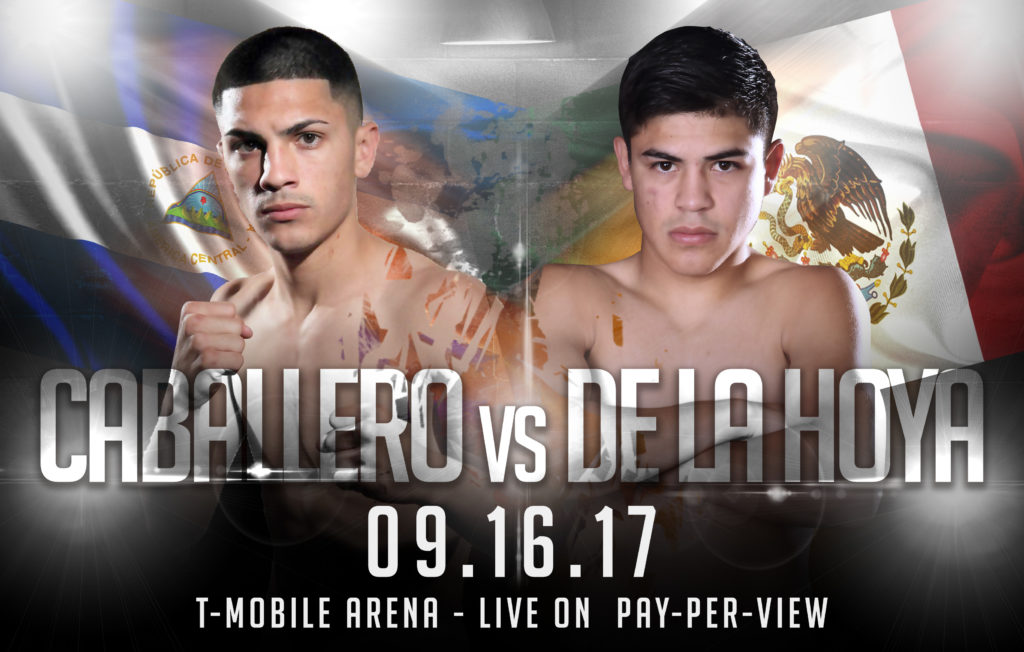 Fresh off an injury that forced him out of a June 30 assignment against Oscar Negrete and ready to approach another fight on his road back to a world title, Randy Caballero gets a call this week from his promotional outfit, Golden Boy Promotions, who offers a bout against the head of the company’s cousin, Diego De La Hoya.

“I was offered the fight, and obviously I said yeah. It’s a great fight on a big pay per view card. It’s a fight that makes sense. Everybody wants to see Canelo vs. GGG and every fighter wants to be on the card. I jumped at the opportunity.”

Caballero, the former IBF bantamweight champion, was told the fight would appear on the televised portion of this year’s mega-bout against Saul Alvarez and Gennady Golovkin on September 16, 2017 in Las Vegas.

“Then, they (Golden Boy Promotions) called back and said he (DDLH) didn’t accept the fight.”

The 26 year old fighter was asked why he thinks De La Hoya, himself a bantamweight division contender and also fighter under the Golden Boy Promotions banner, would decline the fight.

“I don’t know, it could be a few different reasons,” said Caballero, who had a feeling that a fight against DDLH, Oscar De La Hoya’s cousin, would eventually happen. The two have known of each other since the amateurs, sparred each other in previous years while climbing the professional ranks, and Caballero motioned that “bad blood has been brewing for years.”

The fight would bolster the PPV pay per view and would bring another story line to the event with a Mexico v. Nicaragua showdown between two undefeated, action fighters on Mexican Independence Day weekend.

Caballero, (24-0, 14KO) began his career in 2010 and by 2012 was climbing up the title rankings, winning minor titles before going overseas on October 25, 2014 to take on IBF champion Stuart Hall in Monte Carlo, Monaco. Caballero dominated Hall, knocked down Hall in round two and scored a definitive unanimous decision win by the scores of 116-110 twice and 118-110.

The Coachella Valley, California native was then required to undergo a bone transplant on his left heel to remove a bone cyst. Once he was recovered, Caballero was to make his first title defense against Lee Haskins on HBO in Las Vegas, but missed weight and was forced to vacate the IBF belt.

Caballero then had some time away from the ring recovering and re-negotiating his terms with Golden Boy Promotions. Re-signing with GBP in late 2016, Caballero returned to the ring in March 2017 against Jesus Ruiz as the main event of a ‘Golden Boy Live’ card televised on ESPN. Ruiz was no walkover as Caballero had his hands full over 10 entertaining rounds in his backyard of Indio, California inside the Fantasy Springs Casino.

Caballero was set to again headline a Golden Boy Live Event in June against Negrete before being forced out due to injury the week of the fight.

“He injured the same ankle that he had surgery on, the one he had all the problems with before,” said Golden Boy Promotions President Eric Gomez to ESPN’s Dan Rafael last month. “He’s had a lot of pain and the doctor recommended that he doesn’t fight… We want to make sure that Randy is 100 percent before he gets back in the ring.”

Now cleared, ready and willing to once again punch for pay, Caballero has his sights set on a September showdown with DDLH.

“It’s a fight that makes sense… It’s a smart fight. My team is ready, we’re excited coming off this injury, and I think it would put me back on track to win another world title.”

A win over De La Hoya, who is fresh off a win over Alan Isaias Luques Castillo for the WBC’s youth world super bantamweight title, could turn into an eliminator bout for a challenge at the full version of the title.

Caballero has seen much in his career and has been to the heights of the sport, as well as the bottoms of the sweet science’s pitfalls. Caballero is gracious when speaking of his relationship with Golden Boy Promotions, yet doesn’t hold back on his feelings about Diego De La Hoya’s upbringing in the sport.

“The first name Golden Boy gives me is the first name I always take. You’ve got to beat the best to be the best. Him, (DDLH) because of his name, it’s been easier… It’s been a tough road throughout my career. I have busted my ass my whole career, I had to travel the world.”

Speaking on being in the ring via sparring with De La Hoya in previous years, Caballero stated taking the head gear and heavier gloves off is a whole other ball game. “If they want to go based on that, they’ve got another thing coming.”

Having the same promoter, fighting amateur and professional bouts at or near the same weight, sparring and bad blood boiling with De La Hoya for years aside, Caballero believes nothing else matters once a fight is set.

“Once we get in the ring, there is no Oscar De La Hoya. It’s just me and him. The best man will win that night.”