Canelo’s road to redemption starts in May with Mexican standoff versus Chavez Jr. and ends in September with P4P showdown against Golovkin. 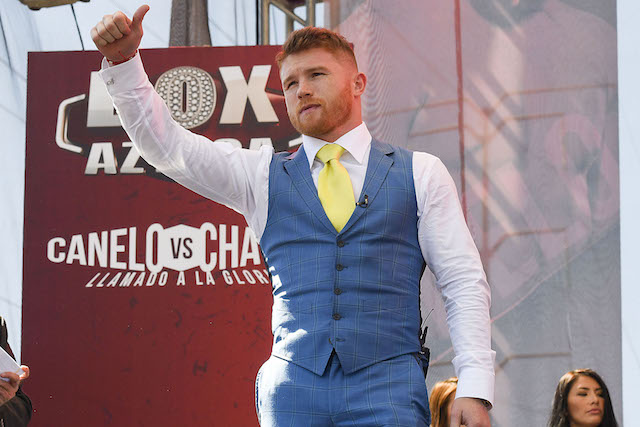 Canelo Alvarez stepped into Universal Citywalk’s AMC theatre in February 2016 full of the quiet confidence that the still young fighter has carried with him throughout most of his career.  Casually dressed in shirt and pants, with his fitted suit carried by an assistant, Canelo calmly walked into the dimly lit theatre which had a designated area for the fighter to stand with lights blaring in his face with a Canelo/Khan banner as a backdrop.

His opponent Khan had just been in the same room 10 minutes earlier and stood while cameras flashed and a throng of reporters surrounded him asking questions.  Canelo came in and chose to sit in the front row of the theatre instead, which none of the press seemed to mind as they gathered around him.  Canelo chose comfort, and as the A side of the promotion, and after a multi-city, international press tour, it was very understandable.

While questions mostly centered around his opponent Khan and the catch weight for the fight, one reporter threw out a recent comment that Julio Cesar Chavez Jr. had recently made about him.

Canelo threw a look of surprise at Chavez Jr.’s comment, in which he essentially said that he would beat Canelo in a match at his weight.  Canelo replied, “Really?” with a grin and a smile, and took the next question.

The question was asked and answered by Canelo, yet now here we are one year later faced with the all-Mexican showdown that has been years in the making upon us.  The volatile back and forth built up to the point where signatures were placed on contracts and Cinco De Mayo 2017 figures to gone down as one of the most memorable being as although there is no title belt on the line, an entire country is a stake.  That alone is the motivation for each fighter; neither wants to go home to Culiacan, or to Guadalajara, as the loser on May 7.

The four-city international press tour didn’t provide any extra dramatics, not that it needed to anyways.  Mexican fans take boxing seriously, and with this match, it’s as serious as it’s going to get.

Yet there is more on the line for Canelo.

If Chavez Jr. loses on May 6, well, he is still the son of the greatest Mexican fighter that ever lived.  If Canelo loses on May 6, Chavez Jr. grabs their country into his arms and suddenly Canelo is faced with his first loss in six fights in a near four year span, having last lost to Floyd Mayweather in September 2013.

Canelo will also be faced with the ridicule of taking away the super-fight between himself and middleweight kingpin Gennady Golovkin.  Over the last several years, GGG’s name has been thrown in Canelo’s direction.  Considerable flak has been given, especially following Canelo winning the WBC middleweight title from Miguel Cotto via catch-weight, then defending the title against Amir Khan at a catch-weight, then dropping the belt a few weeks later rather than face GGG, the mandatory challenger, thus handing the belt over to GGG without a punch being thrown in the ring.

While Canelo does not shy away from the presence of GGG’s name at press conferences such as when Chavez Jr. was mentioned last year, it has to be a nuisance to have not only one potential opponent’s name thrown in during a press tour/fight camp, but to have two names mentioned.  Fan support has waned and GGG has actually amassed a strong Mexican fan following.

What May 6 represents for Canelo is a chance to gain back the die-hard following from his countryman and perhaps have some Chavez Jr. supporters lean in his direction.  Along with the satisfaction of silencing a fellow fighter who has had a years old grudge, Canelo can return to his homeland as its Mexican champion.

What September 2017 represents for Canelo, if the 26 year old chooses to place his signature on a contract to fight GGG, well, that victory is now as big as it gets.

Beating Chavez Jr. wins Canelo Mexico; beating GGG wins Canelo perhaps No. 1 pound for pound status in the sport of boxing.  Coming off a 12 round decision over Daniel Jacobs in March, and Roman ‘Chocolatito’ Gonzalez losing a debated decision to Srisaket Sor Rungvisai on the same night in New York, now finds GGG wearing the pound for pound crown.

Canelo spoke last week via media conference call on the importance of May 6, as well as where his career ends up when his hangs up his gloves.

“Titles are very important to me but this is above that. This goes above a title, any title. It’s for honor, for pride, and it’s very important for me. And to keep making history in my career.”

Imagine Canelo with his countries Mexican flag of support on his back and wearing the P4P crown on his head after defeating Chavez and GGG in succession.  Wouldn’t that be a sight to see?

The roadmap is set in front of him.  Will Canelo take the road to redemption?