Wilder: I’m ready to put on a show 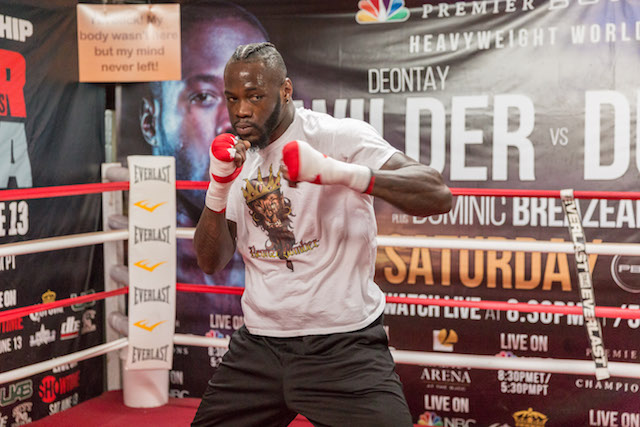 Heavyweight titlist Deontay Wilder (37-0, 36 KOs) heads into Saturday night’s defense against Gerald Washington with all the confidence in the world, despite injuries to his right hand and biceps that has kept him out of action since last July, when he stopped Chris Arreola in Birmingham, Alabama.

“If I had doubted myself because of injuries, then I wouldn’t be here. At this point, I’m ready to go. We all know that when I step into the ring, no matter what’s wrong with me, I’m going to go to work.

Wilder will once again return to his hometown on the February 25 Premier Boxing Champions main event on FOX (8 p.m. ET / 5 p.m. PT).

“This started as a dream and now it’s a reality. It’s always a pleasure to come back home and do it again. We’re going to keep it going. I love being at home.

His opponent Washington (18-0-1, 12 KOs), earned victories over Eddie Chambers and Ray Austin in 2016 after settling for a draw against Amir Monsour in late 2015, and Wilder expects a tough fight.

“Washington might be my most athletic opponent. That should make it interesting and even better than my previous opponent. Everything that happened was a blessing in disguise. Everything works out the way it’s supposed to.

“From the time I got into the ring, I wanted to focus on the aspects of my game that needed improvement, not my injuries. I knew everything would take care of itself if I kept working hard. There’s enough on your mind in the ring without worrying about an injury.

“I’m just happy to be back in the sport I love. I’m ready to put on a show for the world and for my state.”