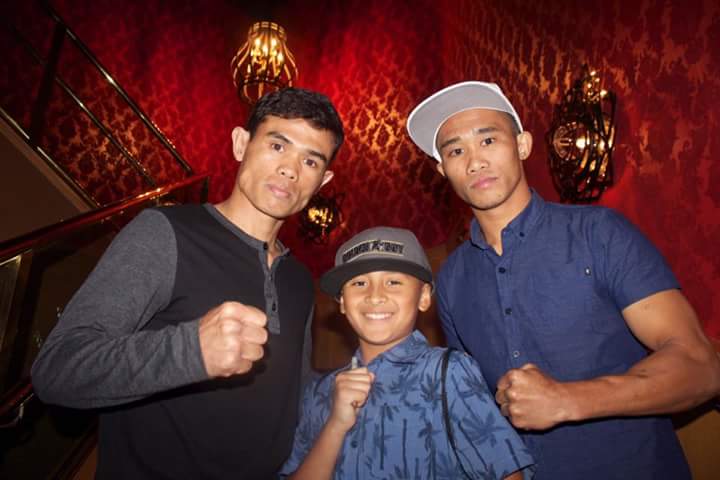 Hidden on an ESPN televised undercard on March 22, 2018 was an absolutely smashing knockout worthy of SportsCenter’s top-ten plays of the day.

Given how the biggest sports network in television is stepping into the boxing realm more and more each day, the channel might do itself a favor by bumping up Eugene Lagos to their televised portion of events.

In case you missed it, and of course you did as most did as well as the fans at the Fantasy Springs Casino who were excitedly lined up and waiting for the nights meet and greet which featured icon Julio Cesar Chavez, those smart enough to glance at the opening bout of the night were witness to this.

After a testy back and forth first round, which saw both fighters neglect to jab and instead look for money punches, Lagos, (12-5-2, 8 KOs) a native of Bukidnon, Philippines, worked the body and then unleashed a monster of a right hook just as opponent Emilio Sanchez circled left towards Lagos’ right hand, a proverbial no-no in the sport.

“On the first body shot I felt that he was hurt and that make him to take his hands down and it give me the opportunity to hit him on the head.”

In what looked nothing like the normal, first round feel out, and especially given that it was the opening bout of the night, both fighters deserve much credit, win or lose, for fighting in the fashion that they did.  Both fist throwers came in with something to prove and were throwing big shots from the first bell, in a fight that would probably have been an exciting eight rounds had Lagos not ended the night early by landing first.

No ref count was needed as the third man in the ring, Tony Crebs, immediately waived his hands over a stretched out Sanchez and Lagos couldn’t help but punch his gloves together and get onto his knees to let out some pent up emotion, no doubt a celebration of what every fighter goes through and works towards in weeks of training camp in what culminates in what is similar to baseball’s home run, basketballs slam dunk or footballs touchdown.

However, much respect is due to Lagos, who erased one of Golden Boy Promotions brightest undefeated prospects with one hellacious punch at :35 of round two.

Sanchez, (16-1, 11 KOs) a 23 year old of Pacoima, California managed by Frank Espinoza, turned professional in 2013 had enjoyed a glossy, undefeated record with three of his last six wins via knockout, simply was handed a career setback at the hands of Lagos.   Lagos, who likes to run marathons between fights, is only 22 years of age who also began his career in 2013, and is the brother of 5-0 featherweight Ulysses Lagos.

An added cherry on top was that the fight lineup was the architype ‘red corner’ night, described in the boxing world as when the promoter signed fighters are all assigned to either the red or blue corner and all fighters in said corner typically win their bouts.  Of the seven fights that night, the red corner fighters went 6-1; Lagos was the only blue corner fighter to have his hands raised in the California desert.

The win couldn’t come at a better time for Lagos, who is trained in the Coachella Valley by Mr. Lee Espinoza and assistants Marcos Caballero and Francisco Calderon at the Coachella Boxing Club, as the Philipine fighter known as ‘Rambo’ had lost three of his last six fights, one via KO, and the featherweight had just fought the month prior in taking an undefeated Ray Ximenez the eight round distance but ended up with a UD loss.

“On the last fight that I lost to Jimenez I felt that he did not hit hard and I did not feel it in my heart to fight him.  I made the decision that from then on I was going to leave my heart and soul on the ring.  And that was I did.  Currently with the people of New Champ I feel that their guidance will take me to new levels.”

Now Lagos and his team can bask in the glory of a one-punch knockout win, viewing the fight multiple times via YouTube (1,716 views and counting), reset and make their preparations for the next time their fighter is scheduled in a blue corner.

New Champ Promotions is a new start up promotional company and is off to a solid start with promoting a solidified, one punch knockout type fighter in Lagos.

“The fighters like the way everything is being done for their training, and the results have paid off,” said NCP representatives.

“Lagos wants to be a winner so he also joined our team he had lost five fights prior to beating De La Hoya’s guy Emilio Sanchez, who was 16 and 0, and he beat him by knockout.  Now Eugene Lagos is a different boxer guys that wanted to fight him before have called and canceled.”

MAGBANUA DOWN, BUT NOT OUT

New Champ Promotions also promotes Philippine fighter Rolando Magbanua, who also fought on the Indio card and went five rounds before being TKO’d by Joet Gonzalez. Magbanua, who was making his United States debut, had two wins via TKO prior to the fight with Gonzalez, and still looks forward to fighting again under the NCP banner.

“These Filipino fighters have been a pleasure to work with they now know what real training is about they are anxious to get back to training.  They can’t wait, they feel that this valley has opened doors and opportunities that weren’t there before and now they have called their friends who are boxers in the Philippines, to tell them how we work and a lot of them plan to make the Coachella Valley their home!”