Joshua-Povetkin set for September 22 in London

Anthony Joshua will make his next title defense against mandatory challenger Alexander Povetkin. 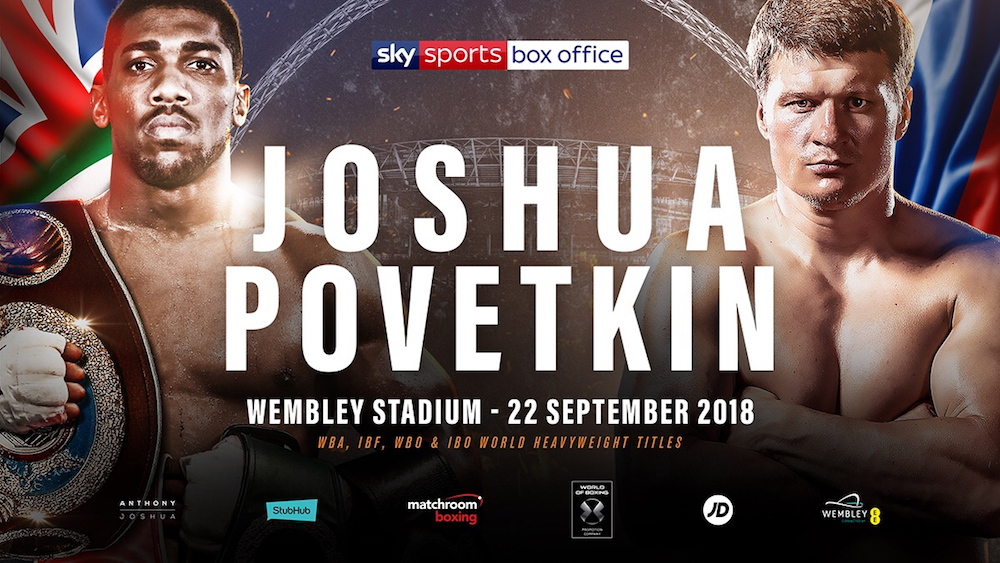 Unified heavyweight champ Anthony Joshua (21-0, 20 KOs) will return to the ring on September 22 to defend his titles against mandatory challenger Alexander Povetkin at Wembley Stadium in London.

Joshua is fresh off of his unification bout with Joseph Parker and is returning to Wembley for the first time since his title-winning bid against Wladimir Klitschko in 2017.

“I can’t wait to get back in the ring, the end of March feels a long time ago now,” said Joshua. “Povetkin is a serious challenge that I will prepare meticulously for. He has [a] serious pedigree and only a fool would underestimate what he brings to the table.

“Training hasn’t stopped for me, but the next 10 weeks ahead will be intense both mentally and physically. I will push myself to [the] breaking point to make sure I am in peak condition for another huge night for British boxing at Wembley Stadium on September 22nd.”

A unification bout with fellow titlist Deontay Wilder was previously in play but negotiations stalled due to disagreements on a purse split, enabling Povetkin to be forced upon Joshua.

Povetkin, a former WBA titleholder, earned that shot after knocking out David Price on the Joshua-Parker undercard.

“The battle for the World title has always been my goal,” said Povetkin. “I fought for the moment to face the strongest in the World and on September 22nd I get my opportunity. Anthony Joshua has four belts and I want them all. I’m glad that our fight will finally take place, the meeting of two Olympic Champions in the ring is destined to be a breath-taking event.”

The fight will air on Sky Sports Box Office in the UK. No TV deal has been announced for the U.S.