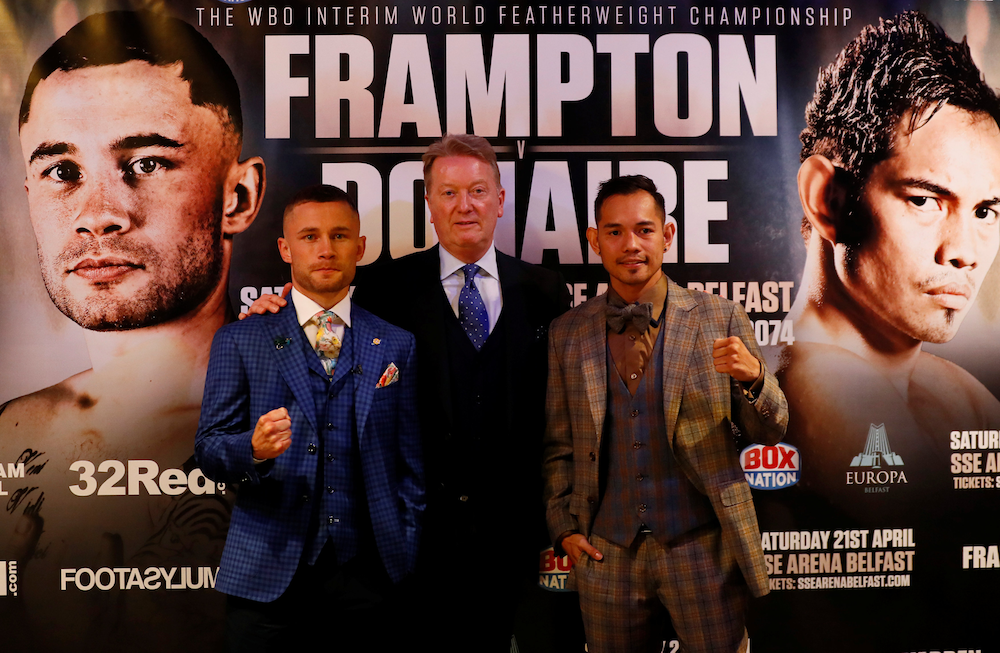 Nonito Donaire and Carl Frampton met in Belfast, Ireland earlier today to speak to the media during their final press conference before their April 21 clash.

“I’m really excited about this fight and I have been since it was announced. To have a guy like Nonito Donaire coming to Belfast to fight me almost feels like a bit of an honor. It’s a quality fight,” said Frampton.

“It’s a cliché when fighters talk about how good their camp has been, but I genuinely believe that the camp that I’ve had has been the best camp because it’s been my smartest camp. I’ve had a completely different approach to training. I don’t remember having a bad day in training or sparring. I feel like everything is coming together and I’m ready to put on a big performance in front of my home crowd.

“I had a lot of respect for Donaire back when he was a champion and I still do. He’s a quality fighter. In terms of accolades, he’s accomplished more than any other fighter that I’ve ever fought. He’s a future Hall of Famer. Hopefully, I can put myself in that bracket one day. He is the best fighter that I will have ever fought. That includes Leo Santa Cruz and [Scott] Quigg and everyone else. Donaire has accomplished more than anyone. It’s going to be big for me to get a result here on Saturday night.

“I think it’s been a bit disrespectful just talking about his left hook. It takes more than a left hook to become a Ring Magazine Fighter of the Year or five-time world champion. He has a brilliant slip right hand. I know a lot about Nonito Donaire and to say all he has is a left hook is a bit disrespectful. He’s a brilliant fighter and he can do a bit of everything. I’ll need to be ready for different situations and I feel like I’ve covered all the bases in training camp.

“Some people want the easiest fights possible but that’s not me. I don’t think that’s Nonito either. I want to be in fights that people talk about and are interested in. This is a fight that puts the winner in position to fight Oscar Valdez for a chance to be a world champion again. When I’m in that position to fight for a world title, it’s fights like this one that are preparing me to go and win it.”

Donaire for his part discussed how he has changed as a fighter over the last few years.

“I believe that I am gifted with great genes. I’m a late bloomer. I feel like I’m starting to get into my peak shape and that’s because of my mentality. Our physical shape can only be as strong as our minds inside that ring. The strength of our mental fortitude has allowed us to be confident here in Belfast where we will be fighting one of the best fighters in the world,” said Donaire.

“I think I’m a smarter fighter than I was in 2012. With the ups and downs that I’ve experienced in my career, I’ve learned what I’m capable of and where my mind is. We’re very confident going into this fight.

“The key factor in this fight is that my wife and I feel that we’re married to Carl because we wake up, we see Carl; we sleep, we see Carl; everything we do we see Carl, so that’s pretty much what it’s all about. I have to say, Carl is an amazing fighter. I have to give it to the guy. For a long time, he was the boogeyman in boxing. He has chosen this fight because it inspires him and I came to Belfast because it inspires me.”