Canelo dominates Chavez, Golovkin is next

Canelo Alvarez puts a beating on Julio Cesar Chavez Jr. and then announces that Gennady Golovkin is next for Sep. 16. 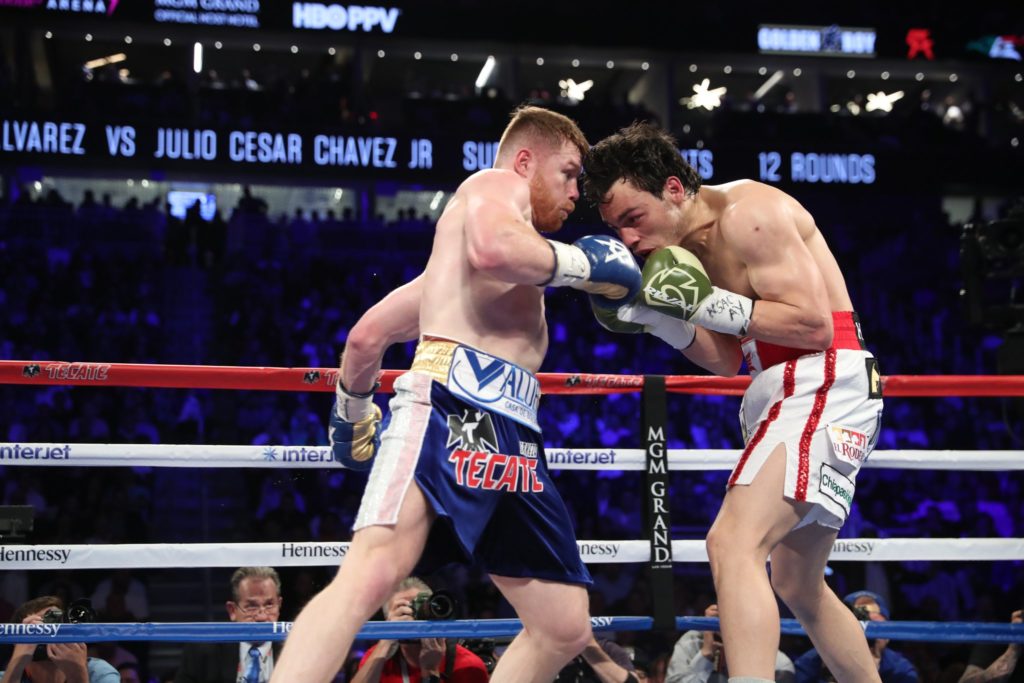 It was a fight that Mexican boxing fans had been clamoring for years and on Saturday night, Canelo Alvarez completely dominated and schooled Julio Cesar Chavez Jr. en route to a clean sweep, unanimous decision at T-Mobile Arena in Las Vegas.

Alvarez (49-1-1, 34 KOs) was too quick, too skilled, and to simply too much for Chavez Jr. (50-3-1, 32 KOs), who couldn’t get off any effective punches – not to the body, not to the head, anywhere.  Canelo’s speed, despite his disadvantage in size, allowed him to pepper Chavez with jabs, right hands, uppercuts and left hooks to the body.  It was a one-sided beating that left fans in attendance upset with the lack of action from Chavez.

By the third round, Chavez had a bloody nose from the stiff jabs, while Canelo slowly swelled his eyes up.  There were moments late in the fight when Canelo would lay on the ropes, inviting Chavez to come in.  Chavez would attempt to go to the body, but ultimately could not pull the trigger as Canelo would easily counter.

As the final bell rung, the dud of a performance from Chavez was more than disappointing, but Canelo to his credit, fought well and had his way from start to finish.

The real fireworks however, came after the post-fight interviews, as HBO’s Max Kellerman asked Canelo if he had an opponent already lined up.  At that point, the lights went low and the large screen above the ring displayed a video package of Gennady Golovkin (who had been at ringside for the main event), and went through the curtain and towards the ring in a WWE-style performance, to officially announce that the two had agreed to fight on September 16.

Gamboa quits on his stool
Thurman has successful elbow surgery