Inside the Canelo-Golovkin LA presser 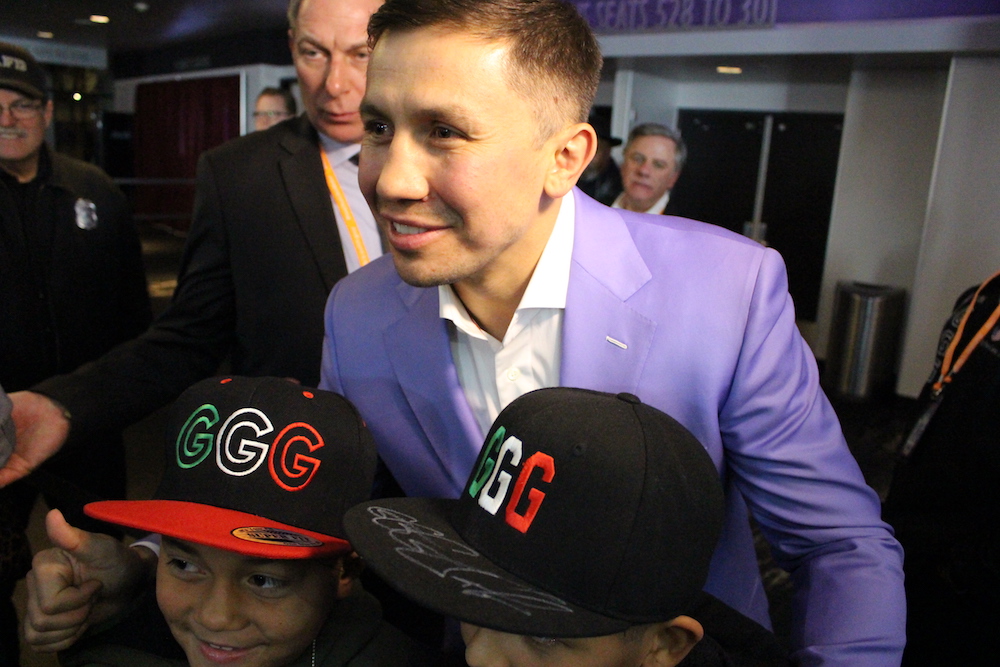 On the same day it was announced that Mark Hammill, also known as Luke Skywalker of Star Wars fame, was going to be given a star on Hollywood’s famous Wall of Fame, hundreds of fans packed the rain-soaked LA Live in downtown Los Angeles as Gennady ‘GGG’ Golovkin and Saul ‘Canelo’ Alvarez stepped toe-to-toe for a one-stop promotional tour to hype their May 5 rematch.

Tickets for the fight went on sale on this day in which both fighters did their mandatory red carpet walks in front of a handful of assorted media who were lucky enough to be able to avoid the unusually rainy January Los Angeles weather as the interviews and photo ops took place inside the Microsoft Theatre prior to the fan event. 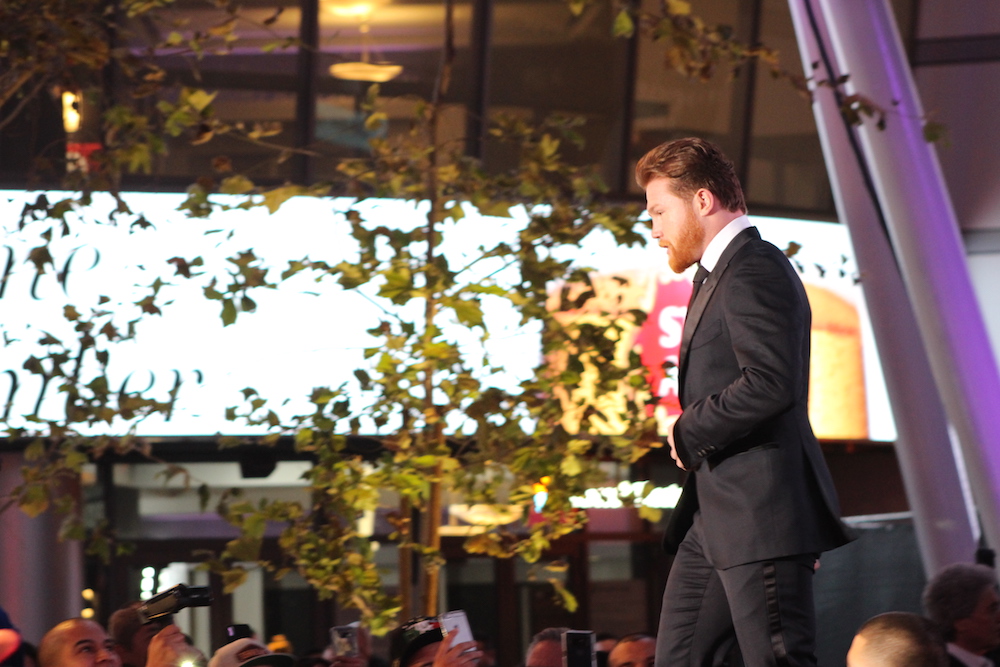 Canelo opted to walk the red-line first as Oscar De La Hoya joined in the festivities.  De La Hoya made TMZ headlines earlier in the day by inviting Electoral President Donald Trump (as Trump cannot make his distinction as the ‘Peoples Champ’ being as the former reality TV star lost the nations popular vote to Hillary Clinton) to GGG-Canelo 2, in which the Prez will be issued fight binoculars by DLH to watch from the nosebleed seats.

The two-fighter superstar combo of Canelo-DLH made their way through the onslaught of media outlets which included Fox 11 news anchorwoman Liz Habib.  Canelo was dapper in a black tuxedo and DLH was dressed semi-causally in sport coat and jeans.  Canelo is rocking more hair, both on top and facial, then he did in fight no. 1, and of course, looks trim and ready for the opening bell on Cinco De Mayo 2018.  Early reports have Canelo planning to train the high-altitude setting of Colorado for the rematch.

WBC president Mauricio Sulaiman was present inside the Microsoft Theatre, perhaps representing a thaw in the organizations icy relationship with Canelo.  It’s hazy on exactly what, how or who started a feud between fighter and title company, as there seems to be a years-long fallout, and I’m sure there can be a whole column dedicated to this subject, yet let’s just keep it at GGG-Canelo.

For fight no. 1 Golovkin was in possession of the WBC strap and the organization even created an additional belt to commemorate the September fight, yet Canelo openly stated prior to the bout that he would not be fighting for either strap. 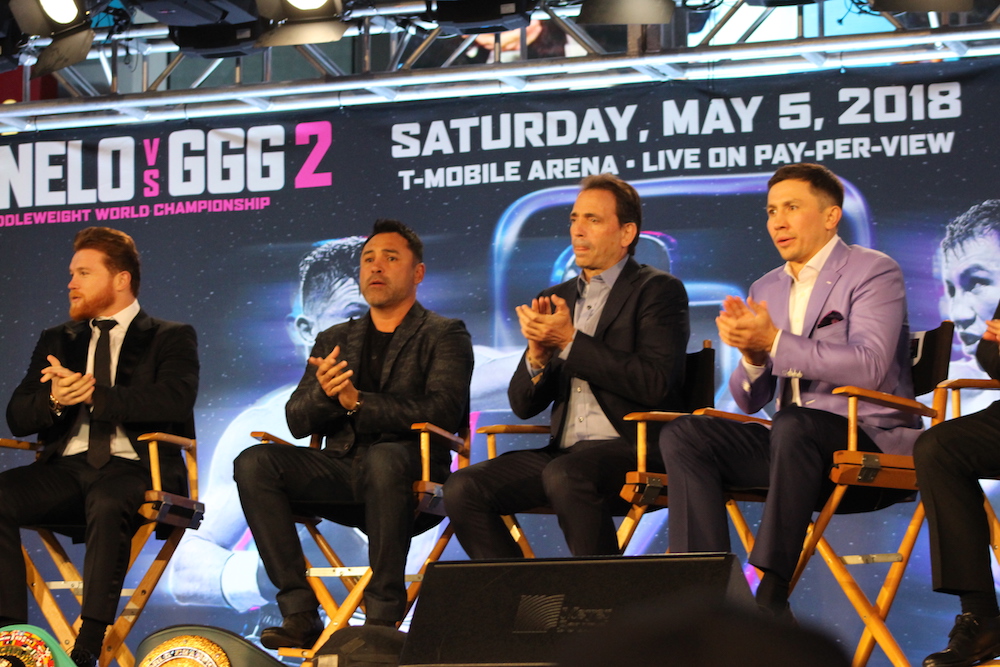 “He will fight for the belt,” Sulaiman told the Times at L.A. Live. “A proud, legendary WBC champion [Golovkin] and a proud, legendary WBC fighter [Alvarez] will come together. Things happen in boxing. You turn the page and move on to greater things.”  Sulaiman indicated he met with GBP personnel and hoped to meet face to face with Canelo.

Also present was Hall of Fame mic master Michael Buffer, who provided great filler for media in-between interviews with both fighters.  Another recognizable figure in attendance was A.C. Slater of Saved By The Bell fame, Mr. Mario Lopez, who handed off his son to be photo’d with GGG on the red carpet.

Golovkin was dressed by some notable Beverly Hills designer whose name was thrown out to the media that I do not recall, looking svelte in a white button down and light purple blazer with shoes that probably cost more than a ringside seat for May 5.

Once outside each fighter was announced to the rain soaked crowd, and it was hard to ignore how much more favor a fighter from Europe’s Kazakhstan gets more love in a Mexican-dominated Los Angeles than the fighter from Guadalajara, Mexico.  Chants of ‘GGG, GGG’ echoed throughout the LA Live quad and when given the chance to ask a fighter a question, a fan in the crowd took to the mic and before saying anything, made sure to let it be known who he favored: ‘Hey GGG what’s up, Mexicans for Golovkin!’

Mexicans for Golovkin is a movement that began in years past as GGG was knocking out anyone he was able to get into the ring with him in the mid 2010’s, and Mexican fans gravitated, then went full-force in support as Golovkin said in broken-English to HBO viewers, ‘I like Mexican style’.

Ever since, even at fights Golovkin has no part of at all, fans are seen wearing ‘Mexicans for Golovkin’, ‘Good Boy Killah’ and cult-following t-shirt design’s from graffiti-boxing artist All In Boxing.

The nights MC, DJ Tattoo, addressed reporter Marco Escamilla about the subject of Canelo being the less favored fighter in a fight that features only one Mexican fighter.  Paraphrasing the loud and outspoken Tattoo, stated that Canelo has dealt with this for years so it’s nothing new, and he himself believes that on May 5, “Canelo’s knocking this mother****er out.”

Ringside With Raymundo: The Bradley Blueprint- Can It Work With Mendez?
Glenn ‘The Rock’ Porras heads to U.S. with title hopes