2017 has already been a stellar year for the sport boxing. Fans of the sweet science have been treated to numerous quality fights so far this year.

One of the most anticipated matchups of the summer is the clash between the undefeated Mikey Garcia (36-0, 30 KOs) and Adrien “The Problem” Broner (33-2, 24 KOs). The 12-round bout will be contested at the junior welterweight limit of 140 pounds and will take place on Saturday, July 29 at Barclays Center in Brooklyn, N.Y. The fight will be televised by Showtime.

Broner, 27, is one of boxing’s most popular polarizing figures. The cocky Cincinnati fighter has won world titles as a junior lightweight, lightweight, junior welterweight and welterweight. His only two losses have come at welterweight to Marcos Maidana and Shawn Porter.

Broner remains one of boxing’s most marketable stars, but a lack of discipline, both in and out of the ring have prevented him from reaching his full potential, resulting in an up and down career thus far.

Broner’s last fight, a 10-round split decision against Adrian Granados on Feb. 18, was at the 147-pound welterweight limit. The weight had to be increased a couple of weeks before the fight because Broner was having trouble cutting weight.

Both fighters realize the importance of this fight and have vowed to put on a great performance.

Broner insists weight won’t be a problem this time around, thanks to a return to training in Colorado Springs, where he trained earlier in his career.

“I’m just more focused,” Broner said at a New York Press Conference. “In the city — in Cincinnati or Washington D.C. — there’s so much going on, and so many distractions. In Colorado Springs there’s nothing to do but look at the mountains and box.” 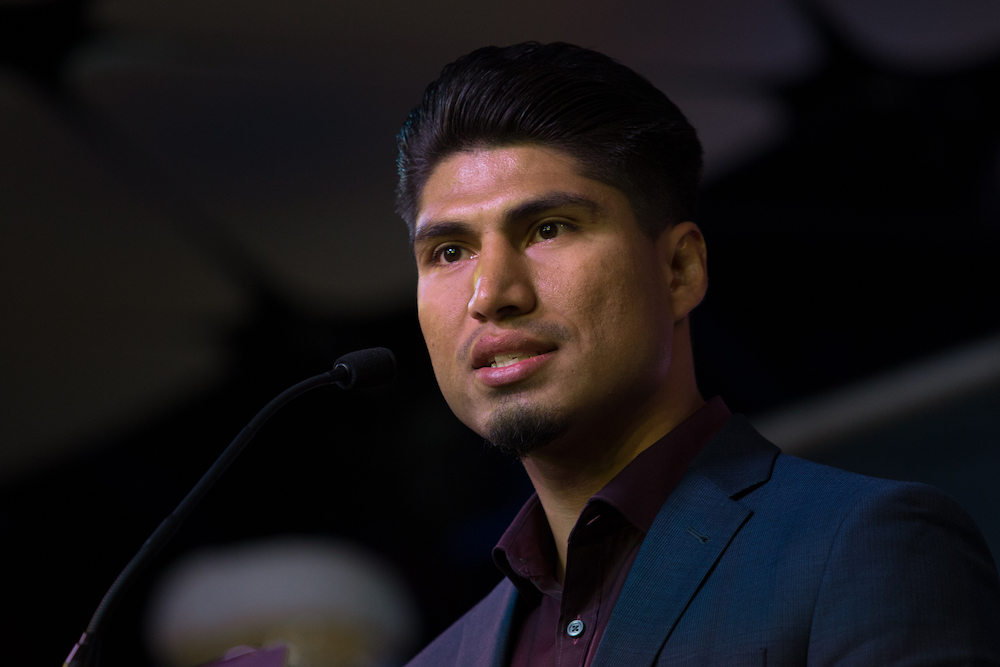 At 29, Garcia is coming off a devastating knockout of Dejan Zlaticanin in January to win the WBC lightweight title at the MGM Grand in Las Vegas. Garcia, one of the nicer fighters in the sport, is trained by his older brother Robert Garcia.  Garcia has held titles at 126, 130 and 135 pounds.

But with no significant fights at lightweight, Garcia will move up five pounds for the non-title bout.

“I haven’t fought anyone who’s been champion in four divisions,” Garcia said on a teleconference with boxing writers, “There’s no one else available who has that résumé. It’s the biggest fight available for me right now.”

“Originally, my plans were to unify at 135. If that was not available I’d look for big names to defend my title against at lightweight, but that was not quite available and Adrien Broner is a much bigger name, a bigger star, so it made more sense to go and pursue the Adrien Broner fight than making a title defense.

“I would like to come back down to lightweight and unify or defend my title [after this] before I permanently move up. If unification matches are available at 135, that’s what I will do.”

Both boxers make for good action fights and fans have yet another mouth watering matchup to look forward too.

Andy Vences ready to shine on Lomachenko-Marriaga undercard
Can Cotto-Kamegai be a Fight of the Year contender?