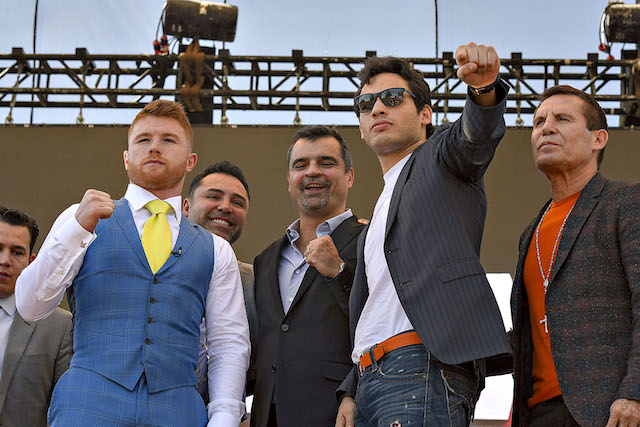 It was only fitting that the Canelo Alvarez/Julio Cesar Chavez Jr. press conference for their May 6, 2017 showdown hit their home country of Mexico as the first leg of the four stop nationwide press tour.

Canelo was flanked by Golden Boy Promotions promoter Oscar De La Hoya, a Hall of Fame fighter who has groomed Canelo into one of boxing’s brightest stars, if not the brightest.  Chavez Jr. had his legendary father, former De La Hoya foe Chavez Sr., at his side.

“This is going to be a Great fight, their styles are perfect for each other and Mexicans should be proud of an event like this,” said De La Hoya.

The mood was joyous as the Mexican crowd cheered on their nations’ two youngest stars in a fight that won’t be fought for a belt (even with the WBC inventing a commemorative title for the event); this fight isn’t an eliminator or mandated throw down.

Simply put, this fight is for Mexico bragging rights to the winner and humiliation for the loser.

“Some of you (the fans) don’t like me, some of you support me but the important thing is that this fight is for Mexico, Mexico deserves this kind of fight, it’s going to be a great one and I will prepare myself as I always do and we will see you May 6th,” said Canelo, who may have been referencing the backlash he has received for the past year regarding not fighting unified middleweight champion Gennady Golovkin.

While it appeared Canelo won the all-important ‘stare-down’ portion of the press conference, Chavez Jr. visibly looked to be at a light-heavyweight or higher weight and towered over the shorter Canelo.

“We conceded at everything they wanted, every single detail, the fight is finally here and I am glad… This fight is from Mexico and I am going to win,” said Chavez Jr., who agreed to a catch weight of 164.5 as well as a $1 million dollar per-pound penalty for coming in over the contracted weight.

“The eyes of the world will be on this great fight, two Mexicans headlining a huge event in Las Vegas, so the world can testify what Mexicans can achieve and believe me… Even Donald Trump is going to be watching,” said Golden Boy Promotions president Eric Gomez.

The duo has also hit New York and Houston, and will end the tour in Los Angeles on Friday.