Canelo-Chavez Jr official for May 6 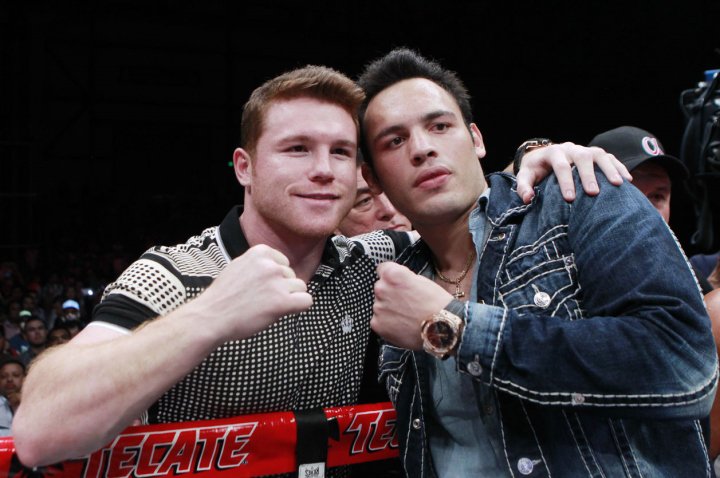 Canelo Alvarez and Julio Cesar Chavez Jr, the two most popular boxers of Mexico right now, are set up for a showdown on Cinco de Mayo weekend.

After weeks of negotiations and bickering between the two sides through social media, Golden Boy Promotions announced the fight on Friday afternoon. The bout will be contested at a maximum weight of 164.5 pounds and it will be televised on HBO pay-per-view.

“I’m excited to announce my fight against Julio César Chávez, Jr. and confirm that I will be prepared, like I’ve been throughout my career, to give a great fight,” two-division World Champion Canelo Alvarez said “I want to remind you that when two Mexican fighters face-off, a spectacular show is guaranteed, and I can assure you that May 6 will be no exception especially during the Cinco de Mayo festivities.”

Coming off a 10-round unanimous decision victory over Dominik Britsch in December, a successful return from a year-long layoff, Chavez Jr (50-2-1, 32 KO) surprised many by coming in comfortably under the 168-pound limit in his last fight.

“I dedicate this fight to Mexico,” Chavez Jr said. “I’m going to win, but my country will too because this is the fight that boxing needs.”

“Boxing has been searching for a fight to draw the casual fan back to our sport, and Canelo versus Chávez, Jr. is just that fight,” CEO and Chairman of Golden Boy Promotions Oscar De La Hoya said. “Canelo, the biggest star boxing, will take on not only a former world champion in Julio César Chávez, Jr., but the son of the biggest star in the history of boxing in Mexico. Add in 98 victories and 66 knockouts between these two superstars along with a Cinco de Mayo fight date, and you have a can’t-miss battle.”

A venue was not announced for the fight. Although Dallas’ AT&T Stadium was mentioned as a possibility, T-Mobile Arena is expected to host the bout as Golden Boy has already placed a hold on the arena for May 6.